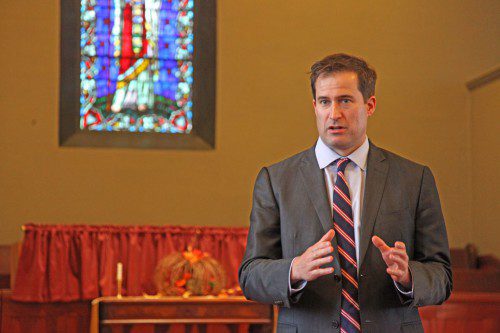 Moulton, the Democratic nominee who is facing off against Main Street Republican Richard Tisei in the midterm election on Nov. 4, appeared at U.U. Church to receive the endorsement of former Sha Na Na member Jon “Bowzer” Bauman and his Senior Votes Count political action committee.

The forum had just over 20 attendees from both Wakefield and Lynnfield, including members of the Lynnfield Democratic Town Committee. Moulton participated in a meet and greet, as well as a question and answer session with voters. He discussed a variety of issues including Social Security, Medicare, campaign finance reform, the drug war, the Middle East and veterans’ affairs issues.

Moulton, who defeated incumbent Congressman John Tierney in the Democratic primary on Sept. 9, said he wanted to use the forum to introduce himself to Lynnfield and Wakefield voters.

After discussing his upbringing in Marblehead, Moulton said he enlisted in the United States Marine Corps in June 2001, three months before the Sept. 11 terrorist attacks.

“I joined the Marine Corps because I wanted to serve and I wanted to give back,” said Moulton. “I looked at different options. I looked at joining the Peace Corps and teaching oversees. But at the end of the day, I had an awful lot of respect for the 18 and 19-year old kids who serve on the frontlines for our nation’s military. I decided I wanted to do my part too.”

Moulton served four tours in Iraq and was in the first Marine company to enter Baghdad. He also worked directly for General David Petreaus as a liaison to Iraqi military and political leaders.

“Over the course of those four tours, I saw some bad leadership in Washington,” said Moulton. “I think Congress didn’t know what they were doing when they sent us to Iraq and didn’t have our back when we were there. And that is not going to change unless we send new leaders to Washington.”

Moulton said if he is elected to Congress on Nov. 4, he said he would work to “breakthrough the partisan gridlock and actually get things done for the American people.” He also said his Marine Corps background will serve him well in Congress, particularly when it comes to foreign affairs

“We actually have fewer veterans in Congress today than at any other time in our nation’s history,” said Moulton.

The forum was geared toward the seniors living in Wakefield and Lynnfield. Moulton said his parents are semi-retired and said they depend on Social Security and Medicare.

“We wouldn’t be able to support my parents’ medical needs if those programs didn’t exist and it’s very important that they get what they expect and deserve,” said Moulton.

Moulton also said “we need to bring more jobs back” to the Sixth Congressional District, and said the district’s unemployment rate is higher than other parts of the state. He also said he supports equal pay for equal work and expanding educational opportunities for children.

The Democratic nominee said voters have an “important choice” this election, and said Tisei is the wrong choice.

“Richard Tisei talks a lot about how he is a moderate, but his first vote in Washington will be to support John Boehner as speaker and to support the Republican agenda,” said Moulton. “And that is not what we need for working families in Massachusetts.”

A man in the audience asked Moulton about the growing influence corporations and big business has over Congress in the wake of the Supreme Court’s Citizen’s United decision. According to the Center for Responsive Politics (Opensecrets.org), a combined $708,493,917 has been spent on house and senate races this election cycle.

Moulton said he is a strong supporter of campaign finance reform because the Supreme Court’s ruling allowing “unlimited campaign contributions” has had a negative effect on American politics.

“As a young candidate running for Congress, I have to spend a tremendous amount of my time raising money,” said Moulton. “And that is not right because there is a lot more important work that I should be working on as a candidate and members of Congress should be doing in Congress instead of going out and raising money.”

A woman who works in healthcare expressed concerns about the opiate addiction crisis in the country. She said she has seen “more and more people in there 50’s, 60’s and 70’s in healthcare facilities that have serious substance abuse problems.”

Moulton said the country’s drug problems are a “serious issue” because a number of people are abusing addictive painkillers, which can often be purchased legally. He also said “the War on Drugs has not been successful at all.”

“We need to provide programs and support for people to get off their addictions instead of finding the perpetrators and punishing them,” said Moulton. “We spend so much effort, money and resources in the United States to incarcerate drug offenders rather than helping them reform and get better. It’s important that we have criminal justice reform to address these issues and make sure people are getting the treatment they need so they can go back to being productive members of society.”

A gentleman in the audience asked Moulton how the United States should handle the crisis in the Middle East.

Moulton said he is “willing to go against” President Barack Obama because he believes its Congress’ job to hold the administration accountable.

“We need to ensure before we send any Americans into harms way that we have a clear strategy, a clear mission and clear goals,” said Moulton.

Moulton said the U.S.’s mission in Iraq should be to defeat ISIS, but said he opposes putting troops on the ground. He said the reason why ISIS was able to overtake large portions of Iraq wasn’t because they defeated the Iraqi army, but rather “the Iraqi army put down their weapons and went home.”

“The fundamental problem in Iraq today is not a military problem, it’s a political problem,” said Moulton. “We have to put the Iraqi government back together in order for the Iraqi army to do its job.”

According to Moulton, the Iraqi army outnumbers ISIS by about 30:1 and said they “have planes, tanks and artillery.”

“I have worked with these guys,” said Moulton. “They are not perfect and they are not the United States Marine Corps and United States Army. But they can take care of ISIS if they have faith in the government they are charged to defend. And they do not have that faith right now.”

Moulton said he supports sending political advisors to Iraq to help “the Iraqis put their government back together.” He said if the U.S. fails to address Iraq’s political problems and views the problem solely as a military issue, Iraq’s problems will continue to fester.

Another attendee asked Moulton about the situation in Syria. Moulton said Syria is “more complicated” because of the ongoing civil war. He said he would have voted against Obama’s plan to arm and train Syrian rebel forces as part of an effort to fight ISIS.

“I think we need a clearer strategy about our long-term goals with Syria,” said Moulton. “In regards to ISIS, I think our first step should be to clear them out of Iraq. We need to make sure what we do in the short term, such as providing weapons to these moderate (Syrian) groups, doesn’t come back to haunt us.”

Moulton also noted airstrikes have “never been an effective long-term solution” because they can lead to civilian casualties if there are no troops on the ground to help coordinate airstrikes.

“We can’t expect American planes, drones and some of our allies’ planes to solve this problem on its own,” said Moulton.

Lynnfield based realtor Penny McKenzie said she has been disappointed with the backlogs impacting the Veterans’ Affairs Administration.

Moulton agreed with McKenzie’s sentiment because he has seen it “first hand.” He said his doctor works for the VA, and said he has had to wait months in order to get an appointment to see a specialist. He said the bureaucracy at the VA is the heart of the problem.

“The bureaucracy at the VA is broken and rather than just throw more money at the existing bureaucracy, which has been Congress’ approach, I think we need to fundamentally reform the bureaucracy,” said Moulton.

Moulton said the VA was built for World War I veterans and said many veterans of Iraq and Afghanistan are now facing different obstacles. He said the VA needs to provide more counseling programs to veterans suffering from Post Traumatic Stress Disorder (PTSD) instead of simply prescribing them medications.

Bauman said Senior Votes Count opposes ongoing efforts to turn Medicare into a voucher program and privatizing Social Security. He said the two programs have helped improve the quality of life for seniors across the country, and said privatizing both programs would simply enrich the coffers of Wall Street and health insurance lobbyists.

“I love music of the 1950’s and early 1960’s,” said Bauman. “However, that does not mean I want to return to the 1950’s and early 1960’s because that is the time before Medicare. And I certainly do want to return to a time where there was no Social Security. These are the two most successful social programs in the history of this republic and we need to keep them that way.”

“We sent this question to Richard Tisei’s campaign and we have not gotten the questionnaire back,” said Bauman. “There has been no answer to any of these questions from (Tisei) and that is a hint of something.”