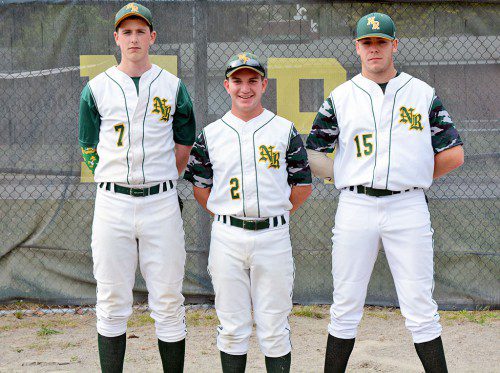 NORTH READING — Three members of the North Reading High baseball team were recently named to the Cape Ann League All-Star team. Mike Driscoll made the CAL first team as the right fielder hit a team-high .367 and he led the league in on-base percentage at .551.

Shawn Divecchia and Greg Johnson made the CAL second team. Divecchia, who plays second base, was third on the team in batting average at .328 while Johnson, who pitches, had an earned-run average of 2.67 as he finished at 4-6.

“I was impressed with what they did and all three deserved to make the team,” said Hornets first-year manager Eric Archambault, about the three juniors.

The Hornets ended the season at 9-11 overall, missing the states by one win, as they fell to Newburyport in the season finale. They were 6-5 (tied for third place) in the Cape Ann League.

“They did an incredible job as leaders,” stated Archambault. “It is always tough when you get a new coach for your senior year after having the same coach for the last three years.”

Things look good for the team next spring as they return 15 veterans including the three CAL All-Stars.

“We should be better next year and I am looking forward to it,” said Archambault.