A hard rain falls on our town 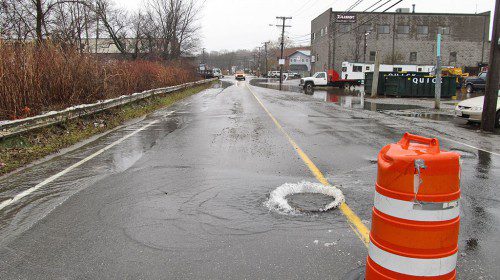 NEW Salem Street was closed off to traffic this morning following a nor’easter yesterday that dumped more than four inches of rain in the area. (Gail Lowe Photo)

WAKEFIELD — Local streets not prone to flooding weren’t so lucky yesterday as the town stood up to the heart of a growling nor’easter that dumped over four inches of rain on Wakefield. All brooks were either filled or overflowing and major intersections like Farm and Water streets were under water.

“We received a lot more rain than any forecast told us we would get,” said DPW Director Richard Stinson. “The drainage system and the brooks were running at capacity. The system was really maxed out and there were overflows all over the place.”

The DPW’s precipitation “spotter” lives in the North Ward not far from Route 128. He recorded 4.43 inches of rain yesterday, with another .04 inches overnight.

The town has received quite a bit of precipitation since Thanksgiving. Since Saturday, Dec. 6, for example, the town has seen 5.73 inches of rain fall.

“We were looking at maybe 2 1/2 to 3 inches (from yesterday’s nor’easter). There was a lot of flooding all over town,” Stinson said. “There was no place for (the water) to go.”

Some neighborhoods that aren’t among the usual suspects for flooding saw it yesterday. Stinson singled out Quannapowitt Avenue as one of them. Basements in Greenwood were underwater as well.

The DPW pumping station at the intersection of Farm and Water streets was at capacity and then some, with overflow tanks close to being filled before the rains stopped and the water level went down, ever so slowly.

The department set up the biggest pumps they have just in case they were forced to put water into the Mill River, which Stinson said he doesn’t like to do.

“If this was snow, I could move it,” the DPW director said. “But with water, we just have to wait.”

DPW crews went all around Wakefield yesterday and last night clearing catch basins of leaves and trash racks of debris. A trash rack is a metal grate that fits over a drainage culvert that collects debris before it gets into the system.

“Our system — and most of those in communities around us — were never built to handle the extreme storms we now seem to get all the time. We could improve our own system but our water flows out of town and depends on the systems of others. Improvements are needed along the entire drainage system, not just ours,” Stinson said.

Firefighters in Wakefield were kept busy throughout the day, responding to 40 calls in all. Thirty of these calls for water-related problems.

Two drivers stalled out in deep puddles, one at 100 Quannapowitt Pkwy. at 6 p.m. and the other at 7 p.m. on New Salem Street. There was a child inside the car on Quannapowitt Parkway, but no injuries were reported, said Fire Chief Michael Sullivan. New Salem Street remains closed to traffic.

Most calls coming in to the Fire Department concerned water in basements.

On the West Side, a home on Friend Street had three feet of water in its basement.

“There was water in the homeowner’s backyard, which pooled,” said Sullivan. “In spite of all efforts to stop the water from entering the home, the cellar ended up with three feet.”

A sump pump is being used to drain the water.

“We have six sump pumps at the Fire Department we loan out to people but with that many calls we can only spread the pumps so far,” said Sullivan.

In spite of the heavy rainfall, no one was displaced from their homes.