A Pioneer’s view of the big game 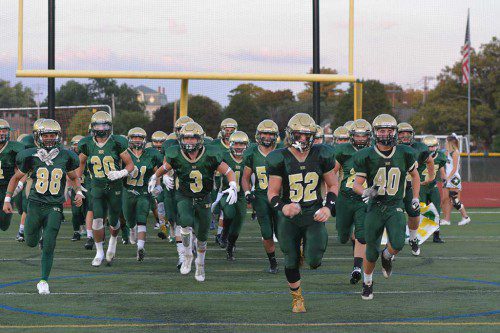 LYNNFIELD — Much has changed between the football programs of Lynnfield and North Reading over the past few years. The Pioneers and Hornets compete in different MIAA playoff divisions, different Cape Ann League divisions, and they play fewer common opponents.

But two things remain the same – a spirited rivalry and high-powered offenses.

The Pioneers (6-3) and Hornets (8-2) have faced only four common opponents this year. The town of North Reading’s dynamic growth has given the Hornets the second largest grade 9-12 male enrollment in the Cape Ann League (407), behind only Masconomet (642), which vaulted them into Division 2A, two divisions higher than Lynnfield. Their male enrollment is now 27 percent greater than Lynnfield’s 320.

None of that will mean much Thursday morning when the schools meet for the 58th time on Thanksgiving Day.

“It’s still a rivalry and still special to the kids, no doubt,” said Pioneer head coach Neal Weidman, who is 6-2 on Thanksgiving Day. “They want to play each other and compete against each other.”

The two squads enter their storied rivalry game after disappointing playoff losses with the Pioneers losing to St. Mary’s of Lynn 44-24 in the D3A North semi-finals two week ago and the Hornets losing in the D2A North Finals to Marblehead 28-7 last Friday.

This one will become the de facto CAL Championship game since the Pioneers (4-0) captured the Baker Division title – their fifth straight – and the Hornets (3-1) are co-champs of the Kinney Division, winning top honors in the league for the first time since 1980.

Both teams figure to be fired up, and if the prior performances hold true, expect some offensive fireworks. The Hornets come in averaging 27 points a game (30 in the last six) while the Pioneers’ offense rebounded from a slow start and is averaging 32 points a game in their last six contests.

Although both teams can light up the scoreboard, they do it in very different ways. The Hornets are a ground and pound team, scoring 32 of their 39 touchdowns rushing and only three via the pass.

Leading the way is explosive running back Matt McCarthy who has 24 touchdowns and is averaging 170 yards a game. His 147 points is second best in D2A. Quarterback Kyle Bythrow has nine rushing TDs.

The Pioneers are more balanced on offense but skew more to the passing attack. Quarterback Matt Mortellite leads D3A with 19 touchdown passes – eight to Nick Kinnon and five to captain Louis Ellis.

Lynnfield has also scored 15 touchdowns on the ground, led by Kinnon and Anthony Murphy, who have four each, and Tyler Murphy, who has three.

The Pioneers have been able to contain McCarthy in the past two years, holding him to 66 yards last year and 33 his sophomore season. Controlling him tomorrow will be a key for the Pioneers.

“He’s fast and physical,” Weidman said of McCarthy. “He runs full speed which makes him difficult to tackle. He has speed and he uses it. He’s not the tallest kid in the world but he’s physically strong.

“You have to be sound defensively as far as covering your gaps because he can pop from anywhere,” Weidman continued. “They run all their plays from both sides to the tight end, away from the tight end, through the tight end. And if it’s not there as designed, he can go back in another direction and find some room.”

But it’s not all McCarthy, Weidman pointed out.

“(Bythrow) also runs the ball really well and their offensive line is good,” the coach said. “I think they have one of the best, if not the best lineman in the league in Bob O’Donnell. He’s also the best punter and kicker in the league too.

“Defensively they’re pretty stingy,” Weidman went on. “They’re fast and they fly around. Overall they have three or four weapons on offense and they’re really good defensively with a couple of difference makers there. It makes for a good team.”

The Hornets were not happy about being placed in D2A, but they performed well playing a tough schedule. After installing a new offense, they struggled in one-score wins over Ipswich and Hamilton-Wenham. After romping over Somerville, the Hornets lost their only pre-playoff game 21-6 to Masconomet.

They then ran the regular season table with wins over Pentucket, Triton and Newburyport. They crushed both Bedford 35-0 and Danvers 35-14 in the first two playoff rounds before running into a tough Marblehead team and falling 28-7.

North Reading is the only team Lynnfield has played every year of the football program, and the Pioneers hold a 35-22 edge in the Thanksgiving Day Game series and 35-23 overall (as the first meeting in 1958 was played in the last week in October).

The Pioneers have won the last two contests and six of the last eight – including the last four times the game has been played in Lynnfield. The Hornets haven’t won here since a 22-0 shutout at the Lynnfield Middle School Field in 2006.

Despite the recent success, the rivalry has been pretty even over the last four decades. The Lynnfield advantage is deceptive and largely the result of the Pioneers’ taking seven of the first eight and 15 of the first 18 Thanksgiving Day games. The turkey-tilt series has been remarkably even since the mid ‘70s. The matchup has been 10-10 in the last 20 years, and for the past 40 years the Pioneers hold a slight 21-19 edge.

Twelve seniors will be suiting up for the Pioneers for the final time Thursday morning, and for many of them it will be the last time they put on a helmet and shoulder pads in a real game. The graduating seniors are captains Alex Boustris, Kyle Hawes, Mike Stellato and Louis Ellis along with Jared Lemieux, Alex Gildea, Paul Barrera, Michael Landau, Nick Contardo, Zach Karavetsos and Nate Wester.

“This group of seniors really hung in there,” said Weidman. “Coming in as freshmen there weren’t a lot of them and they’re leaving not a lot of them. They went through some ups and downs but they really hung in their senior year and to end up winning six games to this point and winning the league is really a tribute to their resolve.

“This game is really important for the seniors,” Weidman continued. “Anytime it’s your last game it means something. Outside of winning, which would obviously make it a lot better, but also playing the best you can and finishing on a strong note is always important. When you leave you want to know that in your last chance you gave the best effort you could.”

As for the outcome?

“We’re going to have to play well to beat them because they’re a good team,” Weidman said. “If we play really well we can beat them. If both teams play really well you have to hope for a couple of mistakes or turnovers. You just never know what is going to happen in a game. You want to play as sound as you can possibly play and then hope for a few breaks. But that’s the way it is when you’re playing a rivalry game.”

Game time at Pioneer Stadium is 10:30 a.m. Tickets will be sold at the gate for $10 per person for all ages.