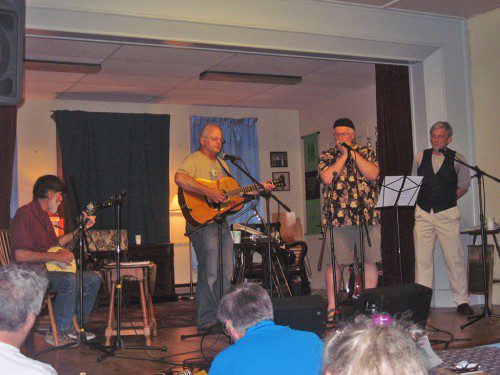 Wakefield had good reason to celebrate the Linden Tree Coffehouse’s 30th birthday this past Saturday night and it did — with this season’s finale. The concert was held on May 30, an appropriate date, considering that the Coffeehouse is now 30 years old, not to mention that it also coincided with Liz Freeman’s birthday.
Freeman handles the bulk of organizing and booking the shows and to show appreciation for all her volunteer work she was presented a photo collage of musicians who have performed at Linden Tree over the years. At the top of the collage right in the center there’s a photo of Freeman herself. Musician and artist Joe Crookston, who sang and played guitar and fiddle Saturday night, also presented her with a whimsical painting he created just for her.
Freeman said that as the 30th season drew closer, she hoped for an all-day festival but that did not happen. Instead, Saturday night’s concert was shortened to about four hours. But in those few hours a line-up of musicians wowed the audience.
Banjo players Ed Britt and Don Borchalt kicked off the festival with a little joke:
“Do you all know the difference between a banjo and Harley Davidson motorcycle?” Borchalt asked the audience.
When there was no response, he gave the answer: “You can tune a Harley.”
From that point, Britt and Borchalt, both fixtures at the Wakefield and Melrose farmers markets and other Greater Boston venues, claw-hammered and picked a half dozen old-time music straight from southern Appalachia with French Canadian and Yankee tunes thrown in. Images of barn raisings, kitchen parties and moonshine came to mind. 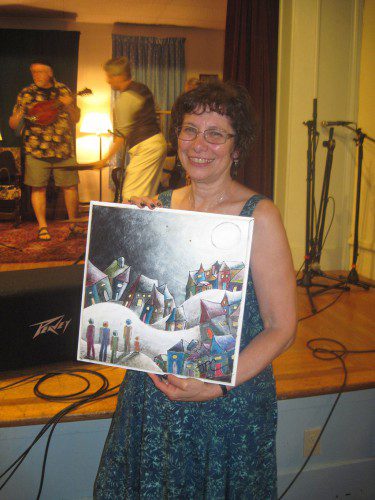 One tune titled “The Wounded Hoosier” was from the repertoire of North Carolina fiddler Marcus Martin. It was a song, Britt said, that he learned from his grandfather.
Next up were Gail Rundlett on dulcimer and Seth Connolly on guitar. Rundlett, also a seasoned performer, started out with a few original songs, including “Thank You” and “Heart of a Believer.”
Rundlett’s lyrics spoke of job layoffs and old lovers, topics most everyone can relate to.
It was the audience’s good fortune that Freeman met and befriended Joe Crookston at a folk festival in New Bedford. 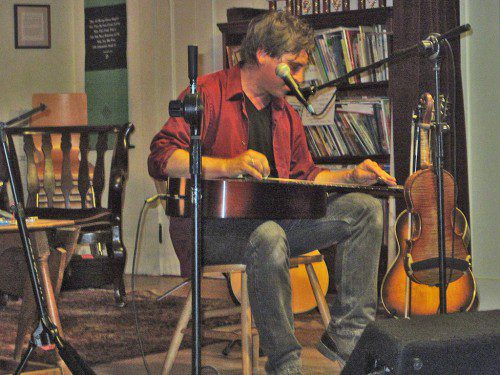 “It was love at first listen and love at first sight,” Freeman said about the man and his music while introducing Crookston. Their admiration for each other was apparent.
“Liz and the volunteers (at Linden Tree) are the story under the news story,” he said.
For about an hour, Crookston gave a dazzling musical performance and shared homespun tales about his childhood and family.
What’s compelling about Crookston’s original lyrics is the humanity that lies within. He reaches into the depths of people’s souls to get them thinking about extending mercy when mercy isn’t due and finding silver linings when you think the linings are old and rusty.
As an example, Crookston told the story about the old Martin guitar his mother left him following her death 10 years ago.
“It was the worst sounding guitar I ever heard,” he said. “I put it in the closet then took it out six months later and gave it another try.”
A friend suggested he turn it into a slide guitar by adding a “nut extender” and that’s what he did. And to show his audience how wonderful that old Martin sounds now he played and sang “Texas Blues” by Bill Morrissey. Suddenly, the Martin took on a new persona.
Crookston went on to show what he could do with a fiddle and sang a thoughtful parable called “Darkling and the Bluebird Jubilee,” a conversation between two birds, one cynical, the other filled with hope.
In between his Saturday night song list, Crookston continued to tell stories and sang about his Schlitz-chugging, cigarette smoking grandfather who shared stories him stories about serving in the Seabees during WW II in the South Pacific and working on the Boeing B29 bomber, the Enola Gay. The aircraft went on to be the first to drop an atomic bomb on Japan.
The evening would not have been complete without a terrific offering from The Blunt Instruments, Linden Tree’s house band, including “Eight More Miles to Louisville,” “The Dutchman” and a favorite sea chanty titled “The Bonnie Ship The Diamond.”
The group includes Ed Britt (banjo), Bill Knott (guitar), Paul Harty (guitar, fiddle, harmonica and mandolin) and Jim Bradley (washboard).
Since 1985, the Linden Tree Coffeehouse has been located in the social hall of the Unitarian Universalist Church on Main Street, and about 12 acoustic music concerts featuring local and national singer-songwriters appear throughout the year. Concerts feature contemporary, traditional, bluegrass and blues.
Over the course of the evening, Freeman presented certificates of appreciation to a number of volunteers who keep the Linden Tree going. In addition to Freeman, they include Deb Feinn, Wendy Dennis, Steve Brandano, Frank Burke, Joe Spear, Ed Dee and Ed Britt, coordinating committee members; Michael Carpe, Jean Anderson, Deb Atkocius, Joyce North and Mary Furey, kitchen crew; Bob Tanner, photographer and Karen Gale, Sandy Frank, Cara Schwartz, Carolyn Peplar, Elaine Freeman, Allison Simcox, Doug Heath and Eric Reid.
Freeman also offered gratitude to the Daily Item for its support.
For a line-up of entertainment schedule for next season, visit www.lindentreecoffeehouse.org.