A soggy but successful holiday stroll 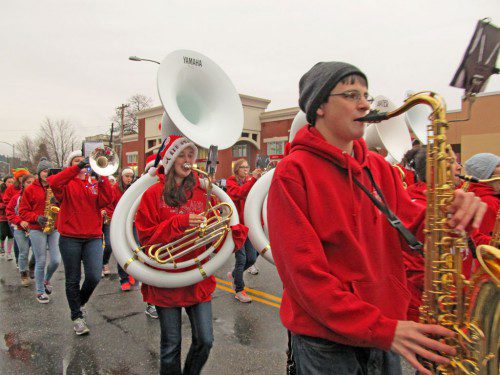 THE Wakefield Memorial High School Marching Band played “Joy to the World” as they made their way down Main Street during the Holiday Stroll Hat Parade on Saturday. For more on the Holiday Stroll, see page 11. (Gail Lowe Photo)

WAKEFIELD — A steady rain for most of Saturday failed to dampen the spirit of this year’s Holiday Stroll.

“All in all, it was a very good day,” said Event Planning Committee Chairman Paul DiNocco, who is also a selectman. “The rain didn’t seem to affect many people. I’m a little surprised the community came out in such numbers to support the Stroll and all the different events our local merchants were hosting.”

DiNocco continued that each venue he visited during the day “was packed,” including the Americal Civic Center, The Savings Bank, The Wakefield Co-operative Bank, East Boston Savings Bank and the Unitarian Universalist Church.

The Holiday Stroll got going around 3 p.m. when people — many holding umbrellas high — marched in the Hat Parade, the traditional beginning of the festivities.

The horse drawn carriage rides seemed popular even as the rain fell.

The old Municipal Gas and Light Department building on Albion Street was reopened during the stroll and 12 vendors set up shop to do some business. They included Glitz Kids, Silpada Silver Jewelry and Fringe.

People stopped by the Daily Item where they had a chance to look through old papers, enjoy holiday cheer and win a great artificial Christmas tree. The eventual winner was Josh Wallace.

“Overall, it was a success,” DiNocco said. “People didn’t mind the rain or if they did, they knew how to deal with it.”

The sixth Holiday Stroll is one of three showcase events put on by DiNocco’s committee. The other two are the summer Festival Italia and the Shamrock Festival set around St. Patrick’s Day.

All monies raised through these events go toward holding the next one on the schedule.