A tie is a win for WMHS boys’ soccer 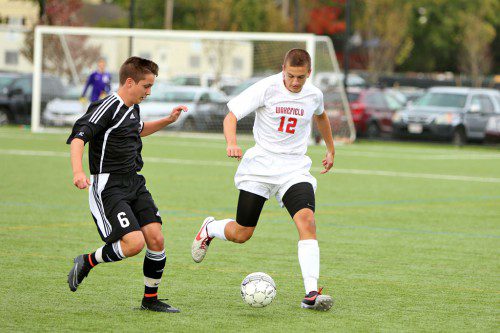 JOE HURTON, a senior, moves the ball up field during a recent contest. The Warrior boys’ soccer team played Burlington to a 1-1 tie on Saturday afternoon at Walton Field to clinch its first state tournament berth since 1999. (Donna Larsson File Photo)

WAKEFIELD — A win is a win and sometimes a tie is a win. A tie was all that the Wakefield Memorial High boys’ soccer team needed to make the state tournament, a goal achieved with a 1-1 draw on Saturday afternoon against Burlington at Walton Field.

Wakefield is now 7-6-4 overall and and 6-6-4 in the Middlesex League Freedom division. It is the Warriors’ first state tournament berth since 1999.

“It’s been just five minutes since the final whistle blew and I’ve had a lot of people come up to me and congratulate me and I love the gesture. I think it’s really nice of people to do that but all of the ‘congrats,’ all of the accolades have to go to these guys, especially the senior class. These guys walked into the program and when they were freshmen, the varsity team went 0-17-1. In their senior year in three years, they’ve turned it around to qualify for the tournament. It’s 100 percent on these guys,” said an elated Wakefield coach Matt Angelo.

Wakefield came out strong with a number of possessions in the Burlington end but the Red Devil defense and keeper Brett Barnard denied its scoring bids.

Wakefield finally broke through a goal when Kyle Geaney took a pass from M.J. Urbano and put it in the low right corner for a goal to make it 1-1.

“I’ve never seen a group of 15, 16 and 17 year olds have so much work ethic and have so much desire to be successful than this group and I’m so proud of these guys,” praised Angelo.

Burlington had a number of scoring chances late in the first half, including a shot by Fariid Kulumba that hit the post but Wakefield held the lead going into halftime.

“I thought the first half that we played excellent. I thought that the first half was one of the best halves we’ve had all year. Credit Burlington. They made a couple of adjustments and really took it to us at times but our defense and Ty Strauss in net were outstanding,” Angelo explained.

Burlington opened the second half with a breakaway by Kulumba that Wakefield keeper Strauss came out to scoop up.

“He’s been doing that all year. He’s been a stud back there and our defense in general has been awesome,” Angelo said.

Neil Fitzgerald had two great scoring chances with consecutive shots that hit the post and then the cross bar. But they didn’t in to the net.

Then Kulumba scored to tie the game at 1-1 but the Warriors were able to hold on to preserve the tie to put them in the state tournament for the first time since 1999.

“We’ve come close a couple of times but we hadn’t been able to get that last point but we did it today. I think the first half we won and the second half Burlington may have gotten the better of us. But at the end of the day, we got the point,” said Angelo.

The Warriors did so with a game to spare as they take on Swampscott in a non-league game this afternoon at 4 p.m. at Swampscott High School.