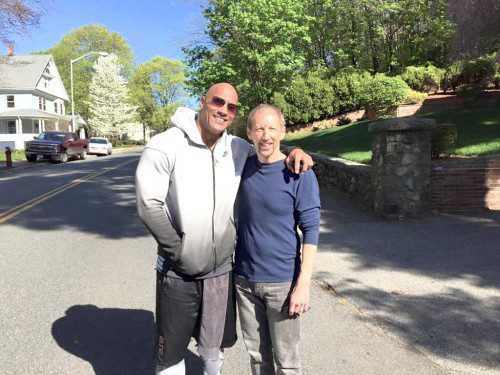 DWAYNE “THE ROCK” JOHNSON AND AUDIE BRIDGES pose just after a minor May 7 accident in front of Bridges’ Chestnut Street home.

WAKEFIELD — Chestnut Street’s Audie Bridges jokes he had his 15 minutes of fame yesterday after local news outlets learned that an action movie star struck Bridges’ pickup while it was parked across the street from his house at the beginning of May.

Dwayne “The Rock” Johnson, who has been in the area filming a movie called Central Intelligence, posted an Instagram yesterday recounting the incident, which happened May 7.

“Here’s a fun story to start your week off … I’m driving to set in my pick up truck — music blasting — I’m singing away like I’m having a one man party in my truck — then I hear a loud BANG. What the hell..? Look in my rear view and see I sideswiped another pick up that was parked in the street and destroyed the side mirror. First thing I thought was, ‘… someone’s not gonna be happy.’ I flipped a U-turn and drove back to scene. Just as I got out of my truck a guy was walking across the street to his truck. I said ‘Sir, is this your truck?’ He stopped and stared at me for a good five seconds, looked around his neighborhood, looked back at me and ‘Yes it is. Why?’. I said ‘Well, sorry to tell ya I sideswiped it and knocked the hell outta your mirror and may have done even more damage. You give me your info and I’ll leave you mine and I’ll take care of everything.’ He stared at me again, cocked his head sideways and said..’Uhhh … ‘Are you The Rock?’ I said ‘Yup.’ He broke out into a huge smile and said ‘Wow, this is gonna be an awesome story!’ I started belly laughing at that, then he started laughing and before you know it we’re both standing in the middle of the street pointing to his mirror and laughing like two ol’ crazy buddies. I checked back in with him a few days later and he refused to accept any money and said he fixed the damage himself. Want to thank Mr. Audie Bridges of Wakefield, Mass. for being so cool about the whole thing. Life is funny cause you never know who you’re gonna run into … and sure as hell never know whose truck you’re gonna sideswipe while driving to work.”

The Instagram shows Johnson and Bridges smiling just after the accident.

Bridges said this morning that the entire incident had a little irony involved. Not long before the accident, Bridges’ wife called him to report that Johnson had been working out at the Boston Sports Club on the Wakefield-Lynnfield line. Like any other celebrity, he attracted the attention of others working out there and Bridges’ wife thought it interesting that people were trying to use exercise equipment as close to where Johnson was as possible, as well as asking him to take photos with them and seeking his autograph.

All this while The Rock was simply trying to go about his business.

Then, Bridges dropped a child off at the North Avenue depot on the morning of May 7 and shot back home to get something. He parked his truck across the street from his Victorian-era home because workers were in the driveway. By the time he exited his house, two black Cadillac Escalades were in the street. Bridges said he had no idea what was going on.

One of The Rock’s assistants told him that a man inside one of the vehicles had sideswiped Bridges’ truck, popping off the sideview mirror. He opened the door and there was Dwayne Johnson.

Asked how a Hollywood star happened to be on Chestnut Street, Bridges opined that Johnson and his entourage might have been at the Boston Sports Club and had to get to the movie set in Wilmington. With the DPW doing work at that time on North Avenue, the group detoured around North Avenue to Chestnut Street to get to Route 128.

The Rock’s movie Central Intelligence involves a mild-mannered accountant who reunites with an old friend via Facebook. Afterward the accountant is drawn into a world of international intrigue. Kevin Hart co-stars. The film is set for release next June.

Other area locales for filming included Temazcal Tequila Cantina at MarketStreet Lynnfield. Johnson was there briefly for a shoot on May 20.

The parents of Johnson’s girlfriend Lauren Hashian live in Lynnfield. Lauren’s father Sib kept the beat as drummer in the rock band Boston.