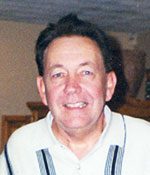 Al was raised in Saugus and was a graduate of Saugus High School. He had been a longtime Lynnfield resident before moving to Peabody. He was the former owner of the Greater Boston Company. Al was an avid Yankees fan and enjoyed fishing and playing horseshoes. He was one of the founding members of the Saugus Sportsman Club.

A funeral service was held at the McDonald Funeral Home, 19 Yale Ave., Wakefield on Wednesday. Visitation for relatives and friends was held at the funeral home on Tuesday.