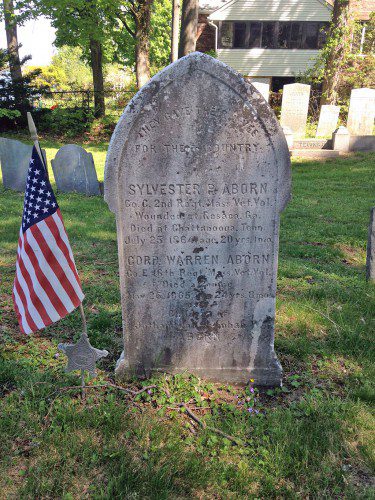 THE ABORN BROTHERS lost their lives fighting in the Civil War.

WAKEFIELD — The American Civil War claimed the lives of nearly 600,000 men. They lie in cemeteries and churchyards across our nation. Wakefield, formerly South Reading has many in its places of eternal rest. A church yard along Lake Quannapowitt contains the most tragic.
One date on their gravestone belies the facts because of the methods of interment in previous centuries.
Sylvester P. Aborn was born in South Reading on April 5, 1844. He was the second son of Jotham and Rebohah Aborn. His occupation was that of a shoemaker. He enlisted on July 28 in South Reading and was mustered into Company C, as a Private, in the Second Massachusetts Infantry Volunteers on Aug. 12, 1862 in Boston.
Private Aborn was at the Battle of Fredericksburg, Va. on Dec. 11 through 13, 1862 but the regiment was not engaged. In the Battle of Chancellorsville, Va. on May 1 through 5, 1863, the regiment sustained 138 casualties. (21 killed, 110 wounded, 7 missing)
The Second Massachusetts Infantry was part of an ill-fated attack at 4 a.m. on the morning of July 3, 1863 at the Battle of Gettysburg, Pa. The regiment’s commander, Lieutenant Colonel Charles R. Mudge, was killed. Of 316 men engaged the regiment suffered 142 causalities. (29 killed, 109 wounded, 4 missing). Private Sylvester Aborn was wounded in the head but quickly returned to the regiment.
The regiment was transferred to the southern theater in September 1863. Sylvester re-enlisted as a veteran volunteer at Elk River, Tenn. on Dec. 31, 1863. The regiment was transferred to the 20th Corps under command of Major General Joseph Hooker thus becoming part of Major General George Thomas’ Army of the Cumberland under overall command of Major General William Tecumseh Sherman. Private Sylvester Aborn would participate in Sherman’s “Advance to Atlanta, Ga.”
Sherman’s advance started from Chattanooga, Tenn. in early May 1864. The second major battle fought was at Resaca, Ga. about 70 mile northwest of Atlanta. The battle was fought on May 14 and 15, 1864.
On the second day of the battle Private Sylvester Aborn was wounded in the right knee during an attack against confederate positions under overall command of Major General Joseph Johnston. Private Aborn was transported back to the Military General Hospital in Chattanooga. Private Sylvester Aborn succumbed to his wounds on Sunday, May 25, 1864. He was buried with military honors on the same day. Private Sylvester Aborn was 20 years old.
Sometime later his body was disinterred from the cemetery at Chattanooga, transported back to South Reading and re-interred on July 25, 1864 in what we now call “The Old Burial Ground” next to the First Parish Congregational Church on Church Street. The headstone is near the right rear of the cemetery.
Warren Aborn is believed to have been born in South Reading on Sept. 27, 1840. He was the eldest son of Jotham and Rebohah Aborn. When the clouds of Civil War overshadowed our country, Warren left his job as a shoe maker then enlisted, as a Private, in Company E of the 16th Massachusetts Infantry Volunteers. He was mustered in on July 12, 1861 at Camp Cameron in North Cambridge. The 1,000 man regiment left the state on Aug. 17, 1861 and eventually arrived at Fortress Monroe, Va. and went on garrison duty at the fort until May 8, 1862.
The 16th Massachusetts Volunteers joined Third Corps of the Army of The Potomac at Fair Oaks, Va. on June 13, 1862. Five days later, as the Army of The Potomac neared the confederate capitol of Richmond, the regiment was involved in its first engagement along the Williamsburg Road. Between June 25 and July 1 the regiment, was engaged in the battles of Oak Grove, Glendale and Malvern Hill. The regiment suffered heavy losses during its first two weeks in combat as well as the death of its commander, Colonel Powell T. Wyman at Glendale.
Unable to capture the confederate capital and under pressure from confederate forces the Army of the Potomac was forced to withdraw back to Fortress Monroe. After a brief stay at the fort the 16th Massachusetts moved to Alexandria, Va. arriving on Aug.16, 1862. On Aug. 29 the regiment participated in the Battle of Groveton. It was one of the first “bayonet charges” of the war. About 300 men were sent into battle. It suffered 110 causalities. (19 killed, 64 wounded, 27 missing) The regiment participated in the Second Battle of Bull Run the next day.
The regiment was at Fredericksburg from Dec. 11 through 13, 1862. The regiment was heavily engaged at Chancellorsville from May 1 through 5, 1863 suffering 73 causalities. (6 killed, 59 wounded, 8 missing) The regiment was engaged in General Daniel Sickles’ defense along the Emmetsburg Road at Gettysburg on July 2, 1863 suffering 81 causalities (15 killed, 53 wounded, 13 missing out of 245 engaged) This equals a 33.1 percent casualty rate. This exceeded that of Colonel Joshua Lawrence Chamberlain’s 20th Maine Regiment’s famous defense of Little Round Top.
Warren Aborn was promoted to Corporal on Sept. 1, 1863. He re-enlisted as a Veteran Volunteer on Jan. 4, 1864. Corporal Aborn was present at the Battle of Wilderness on May 5 through 7, Spottsylvania on May 8 through 12 and the Siege of Petersburg from June 16 to July 11, 1864. Warren was transferred to the 11th Massachusetts Infantry Regiment on July 11, 1864.
Corporal Warren Aborn took sick on Dec. 5, 1864. He went home on sick leave but never recovered. Warren Aborn, whose regiment was engaged in more than 10 major battles, died at home on May 25, 1865. He was 24 years old. Warren Aborn died exactly one year to the day after his younger brother Sylvester. Warren is interred in the family plot along with his brother Sylvester, his parents and a brother Augustus who died in 1849.
The epitaph on top of their gravestone is poignant, it reads: “They gave their lives for their country.”
A second inscription is even more heartbreaking, it reads: “Only children of Jotham and Rebohah W. Aborn”
Notes:
Information gathered from official military records from National Archives. Corroborating information gathered from Military Records: Massachusetts Civil War Soldiers and Sailors, 1861 – 1865
Gettysburg casualty rates from “Regimental Strengths & Losses at Gettysburg” by Busey and Martin 1982, pages 246, 248