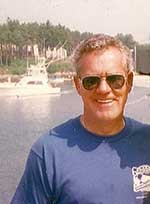 Born in Medford on Dec. 22, 1935, he was the son of the late Donald G. and Elizabeth (Glennon) MacLeod. He graduated from Reading High School.

Andrew worked as the administrator for several nursing homes throughout his life, including facilities in Billerica, Martha’s Vineyard and Shelburne Falls in Massachusetts.

Andrew was a big Bruins fan and also enjoyed watching the Patriots and Red Sox. He loved the ocean, especially spending time in York Beach, one of his favorite spots. He lived right near a lake at his home in Ashfield and one of his favorite hobbies was fishing.

He was predeceased by his brother, Donald MacLeod; his sister, Bettianne Wells; his daughter, Laurie Cheever and her mother Gail MacLeod. He is also survived by eight grandchildren, five great-grandchildren and several nieces.

Calling hours will be held at Croswell’s Funeral Home, 19 Bow St., North Reading on Friday, July 15, from 4 to 8 p.m. A memorial service will be held Saturday, July 16 at 11 a.m. at the Union Congregational Church, 148 Haverhill St. in North Reading with a collation to follow. All are welcome to attend.

In lieu of flowers or donations, the family would like to make a special request. Please take time and spend it with someone you love doing something you enjoy. Life is so short and before you realize it the people you love are no longer there to talk to or simply be with. We think Andrew “Chuck” MacLeod would approve. Thank you. www.croswellfuneralhome.com.