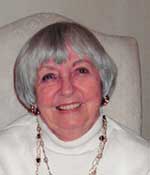 WAKEFIELD — Anne N. Hubbard, 86, a longtime resident of Medford, passed away peacefully at Genesis at Wakefield on Thursday, Nov. 10.

Anne was born in Boston on June 3, 1930, daughter of the late Thomas J. and Rosemary (Malone) Hubbard. A Somerville native, Anne graduated from Somerville High School, Class of 1946.

She settled in Medford and began a career in banking at age 19. Originally employed as a secretary at Shawmut Bank, Anne worked her way up and through several mergers to reach management level. She retired at age 59, as a marketing officer for Bank of America, after a 40 year working career in Boston banking.

Anne was an engaging, bright and independent woman who lived a full and faith filled life.

Anne was a longtime parishioner of St. Francis of Assisi in Medford and lived her faith daily. She was honest, direct and independent with friends and family alike. She and a longtime friend, Delores, traveled the world together. They sought out new international cultures without hesitation and visited countries that intrigued them. Anne and Delores together ventured to China in 1973, traveled through Europe extensively and took a trip on an African safari. With a strong connection to her Irish roots, Anne also returned to Ireland many times over the years with her family and friends. Anne had an adventurous spirit and keen mind for experiencing new places.

Back at home in Massachusetts, Anne stayed busy with regular shopping trips to Filene’s Basement in search of gifts or a new piece of gold jewelry. She stockpiled gifts for her family, and went above and beyond for her nieces and nephews for Christmas. In her free time, Anne was an avid reader, enjoyed gardening and was devoted to her Church.

With her late sister Alice Brennan, she was also a longtime member of the Melrose Garden Club. Anne will be remembered as a sociable, strong and generous presence with steadfast faith and devotion to her family. She will be missed.

Relatives and friends gathered in honor of Anne’s life at the Robinson Funeral Home, 809 Main St., Melrose on Monday, Nov. 14, from 4 to 8 p.m., and again on Tuesday at 9 a.m. before leaving in procession to Most Blessed Sacrament Church, 1155 Main St., Wakefield for her funeral Mass celebrated at 10 a.m.

Interment in Oak Grove Cemetery, Medford. Gifts in Anne’s memory may be made to the Alzheimer’s Association, 480 Pleasant St., Watertown MA 02472, or to St. Francis of Assisi Church, 441 Fellsway West, Medford MA 02155.