Another win for Melrose girls’ volleyball

Team improves to 2-0 with a Stoneham sweep

MELROSE—The Melrose High girls’ volleyball team conducted a clean sweep over Stoneham on Saturday afternoon at Stoneham High, beating the Spartans 3-0 in sets of 25-7, 25-12, and 25-6. The win is their second straight over Stoneham after their home opener win on March 6. Now, Melrose enters a series of games against Watertown with an unbeaten 2-0 record. It starts on the road this weekend.

Melrose hitters were particularly sharp. Leading once again for Melrose was junior Elena Soukos, who had 7 kills, while sophomore captain Chloe Gentile and junior Abby Hudson both had five.

Serving was a particular strength, with Elena Soukos, Eva Haralabatos, Sofia Centrella and Chloe Gentile looking flawless on the line. Soukos and Haralabatos were a mighty pair in the opening minutes of the game, serving up points and aces on a 10-1 run. Soukous delivered a series of kills to help Melrose take large leads of 11-4 and 17-6. A series of aces by senior middle Grace Sanderson helped clean the set up, 25-7.

Set two once again was all Melrose. Gentile delivered three kills and Abby Hudson pounded the floor to help Melrose take an early 10-2 lead. Gentile then helped stretch that lead with kills and blocks at the net while Gia Vlajkovic and Sadie Jaggers looked sharp up front, adding their own kills. Melrose took the set win, 25-10. In set three, serving make all the difference. Gentile had three block kills in the set and Soukous delivered cleanly on the serving line with ace after ace. Abby Hudson looked powerful with two straight kills that helped Melrose roll out to leads of 14-2 and 19-2. Sofia Centrella had a nice run on the serving line and a Grace Sanderson kill closed the door, 25-6.

Defensively, Melrose libero Autumn Whelan shined with a workman-like effort that prevented any ball from touching the floor. Setters Eva Haralabatos and Emma Desmond both recorded over 10 assists each. Overall, Melrose enjoyed a well-balanced, team-effort win.

Melrose coach Scott Celli is very pleased with the team’s efforts after two weeks of play. “Coming back this season our concern was defense, but I think our defense, led by Autumn Whelan, is the backbone of this team. Not many balls landed on the floor against Stoneham. We’ll be tested more this season but I think Autumn did a fabulous job. She reads the play as good as anyone whose had this job. It’s like she has a sixth sense.”

Indeed, getting the critical first passes to the front allows Melrose attackers to do their job. And offense is not an area Melrose is lacking in. “I’m not sure when we’ve had so many strong hitters at once like this,” said Celli. “We have high level players like Emily [Hudson] Chloe [Gentile] and Elena [Soukos] but we have new hitters like Abby Hudson who might have the hardest punch on the team. We’ve also been pleasantly surprised by new players like Gia [Vlajkovic] Sadie [Jaggers] and Ava [Burns]. All three have just vastly improved since the season started. Sadie, in particular, as a freshman, is a natural middle who fits right in.”

So far this season, junior Elena Soukous has emerged as a real weapon on the outside. Says Celli, “I knew coming in that she’d be a great outside starter for us, but her back row work is excellent. She has a great first pass, and her serves are lights out. She’s just has a rifle serve.”

Sophomore captain Chloe Gentile continues to take command on the floor, and the team is better for it. Says Celli, “When Chloe plays well, the whole team plays well. She’s our energizer bunny and a player whose excitement can lift to team to a higher level.”

Senior middle Grace Sanderson a/k/a “the Swiss Army Knife” (as the coach refers to her) has seen increased time, thanks in part to her great height and adaptability. “Grace has really stepped it up and does a great job blocking up front. I can use her in any position at the net. This makes her so valuable.”

While Whelan continues her smooth libero duties, there is plenty of help in the back row for defense. Melrose is in good hands with senior Sofia Centrella, sophomore Ava McSorley and freshman Grace Gentile. Centrella, in particular, has been strong in serving. “Sophia’s doing great in her serving and I’m really happy with her work in the back row.” He credits both McSorley and Gentile for hitting the ground running on defense as new players. “There is something really smooth about Ava’s game. I’ve been impressed with her defense. And Grace is going to be a great defensive specialist. She’s so receptive to advice and there is so much potential in her.”

Against Stoneham, both Eva Harlabatos and Emma Desmond had more than ten assists, clearly shining in their role as setters. That’s critical for Melrose’s success this season. “The fact that both of them are doing so well in their jobs is a huge plus for us,” says Celli.

So far it seems that all systems are a go. Melrose will now face two consecutive games against Watertown (0-2) and look to double their wins during the series. Says Celli, “We’re focusing on situational plays during practice, really working on game strategies, but at the same time having fun.”

Fans can check out their road game in Watertown on Saturday at https://wcatv.org (Watertown public access). They return home on March 26 to host Watertown and will be covered by Melrose High TV. 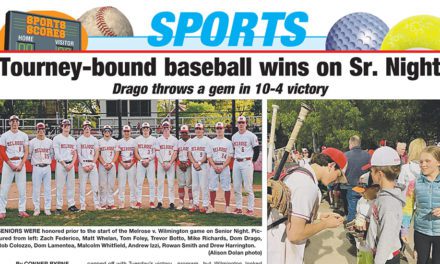 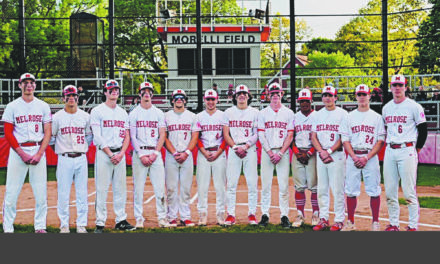 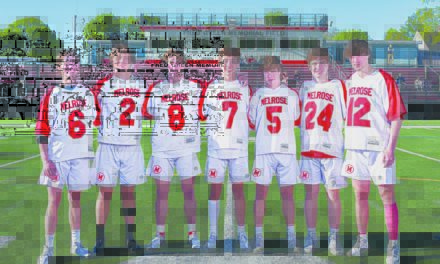 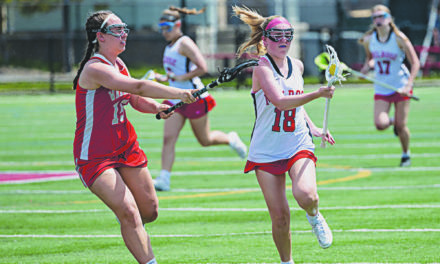 Fight to the finish for girls’ lax team