Published in the September 7, 2016 edition 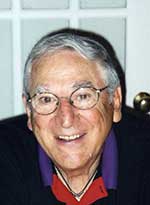 He was born in East Boston on February 24, 1926, the son of the late Angelo and Josephine (Schraffa) Grasso. He was raised in East Boston and was a graduate of East Boston High School. He lived in Lynnfield most of his life.

Mr. Grasso retired as the Assistant to the President of the Sage Motor Hotel Corp. Mr. Grasso was a Navy veteran of WWII. He earned the Asiatic–Pacific Area medal (four stars), the American Area medal, and the Philippine Liberation Medal (one star).

Among his many military accomplishments, Mr. Grasso served aboard LST 775 when it landed on Iwo Jima and witnessed the signing of the treaty with Japan in Tokyo Harbor. He was a Past Commander of the Lynnfield American Legion Post 131, a longtime member of the Veterans of Foreign Wars in Revere, and the U.S. LST Association – Massachusetts Chapter. He attended the dedication of the WWII Memorial in Washington, D.C.

Mr. Grasso was an avid golfer, a musician, enjoyed traveling and enjoyed entertaining his many friends.

A visitation for Mr. Grasso was held on Wednesday morning at the Solimine Funeral Home, 426 Broadway, (Route 129) Lynn, followed by his funeral service, which was also held at the funeral home.

In lieu of flowers, donations in Mr. Grasso’s name may be made to the Lynnfield War Memorial Committee, c/o the Town of Lynnfield, Town Hall, 55 Summer St., Lynnfield, MA 01940. To sign the online guestbook, please visit Solimine.com.