Historic House Tour: A trip back into town’s architectural past 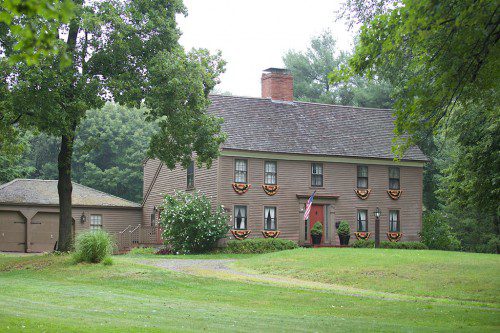 BUILT in 1667, the Joseph Henfield House at 300 Main St. is the oldest house in town and one of only eight first-period homes still standing. (Kerry Goodwin Photography)

LYNNFIELD — The signature event in the town’s year-long celebration highlighting three centuries of local history arrives on Saturday, Sept. 20, and it’s not too late to participate.

The Antique House Tour, featuring six of the town’s most well-preserved private homes, will provide patrons with a rare glimpse into the town’s rich architectural past. The tours will be held from 10 a.m. to 2 p.m.

Free tours of the 1714 Meeting House will also be available to the public from 9 a.m. to 4 p.m. and light refreshments will be served.

Patrons may purchase house tour tickets for $30 per person and obtain their guidebooks on Friday, Sept. 19 from 7-9 p.m. or Saturday, Sept. 20, beginning at 9 a.m. at the Old Meeting House on the common.

Historical Commission member Linda Gillon, who serves as co-chair of the event with Faith Honer-Coakley, said a map to the homes on the tour is included inside the guidebook. Trolley transportation to the homes will offer “added charm” to tour participants, but is strictly optional, she said. Trolley tours will start and end at the 1714 Meeting House.

For those who choose to drive their own cars to the homes on tour, they may visit them in any order they choose starting at 10 a.m. Plenty of side-street parking will be available in the neighborhoods, but Gillon reminds participants that no parking will be allowed in the driveways of the tour homes.

The guidebook will serve as the admission ticket and must be presented to the guides at each home. It is also a keepsake that includes a plethora of information on the featured homes plus stories on other historically significant places and events in town, such as the history of Camp Stanton/Camp Schuyler on the old Newburyport Turnpike (Route 1) in Lynnfield and its role in training recruits sent to fight in the Civil War. A living history re-enactment of this camp, open to the public, will take place on the South Common over the weekend of Saturday and Sunday, Oct. 4 and 5, complete with a cannon, blacksmith and horses.

“Each room being shown will have a guide to point out special features,” Gillon told the Villager. “Each house will be different, depending on how many rooms are being shown, how much detail is in the room, and how many questions are asked.”

The Historical Commission points out that these antique private homes are not handicapped or stroller accessible and respectfully requests that those taking part in the tour do not wear high-heeled shoes or take photographs inside the homes.

For the past eight years, Linda Gillon and her husband Bob have had the good fortune to reside in the oldest house in town, the Joseph Henfield House at 300 Main St., built in 1667. They purchased it from the Spear family, who resided there for the previous 50 years.

After living in a nondescript ’70s style home for over 20 years, Gillon said that although they weren’t looking specifically for an antique home she does enjoys living in one even though it requires a lot of work.

“In my old home, I felt like it was my house. In this house I feel like a caretaker. I feel the responsibility to continue what all the other families have done prior, and that’s to respect the building and its architecture.” Case in point, she and her husband just finished re-glazing the windows in time for the tour. 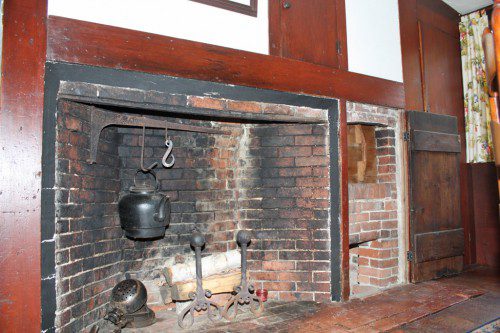 FIREPLACES were necessary to provide both warmth and a means of cooking in the homes of the early inhabitants of town and as such are quite prominent in all of the homes on the historic house tour. This fireplace in the present-day dining room of the Joseph Tapley House includes a beehive oven at the far right, one of two such ovens in the home. (Maureen Doherty Photo)

Originally a saltbox half-house, the 1667 home had two rooms with a lean-to. The post-and-beam home was expanded over the centuries, but care was taken to blend the old with the new. In 1915, a dormer was added to the saltbox, making it a colonial, Gillon said.

It has original wide pine floors and a massive center chimney that measures 22 feet square at its base, from which five fireplaces originate in the keeping room, dining room, living room and two original bedrooms, Gillon said.

There are also numerous chimney closets. One such closest is 5 1/2 feet square with a vaulted ceiling. Local lore has said that this room may have been used as a means to hide from Indians because it is large enough to crawl inside and replace the bricks. If the closet door was opened it would just appear to be the exterior of the chimney. But she prefers to think of it as a place where meats were smoked from the hooks or as a hideaway that could have been just as easily been used to assist those traveling on the Underground Railroad.

The Henfield House also features HL hinges and hand-hewn chamfered beams. The beam in the master bedroom has a lamb’s tongue detail. Once home to Rev. Benjamin Adams, who was the third pastor of the Second Parish Church of Lynn, now the Old Meeting House, the pastor’s son and namesake was the drummer boy for Capt. Nathaniel Brancroft’s Lynn End Minutemen in 1775.

Built circa 1672, the Hart House at 172 Chestnut St. is a “broken-back saltbox” with a center chimney that sits facing south on the lot, like all early country houses. It was handed down through seven generations of the Hart family, descendants of Isaac Hart, who was born in England about 1614. It was sold out of the Hart family in 1947.

Currently owned by Mark Ingaciola, the Hart House was the subject of a feature story published in the Villager earlier this year. It remains a fine example of 17th century construction. A symbol of a heart found embedded in a pine beam in the 18th century addition is believed to have been placed there by a Hart family member.

The couple has owned the home since 1980 and it is where they raised their son and daughter.

Jane Ellis is a direct descendent of Joseph Tapley — his great-great-great-great-granddaughter to be exact —although this family connection was discovered quite by accident. Her branch of the family eventually moved to the Springfield, Mass. area and she was unaware of her family’s connection to Lynnfield prior to being shown the home over 30 years ago. She noticed the name Tapley on a historic marker, which she recalled was her grandmother’s maiden name, and the connection to her family tree was confirmed.

The home has an interesting past. John Ellis pointed out that it was once known as Tapley’s Tavern, serving travelers en route to Lowell from Lynn. At the time, half the house was located in Lynn, which was dry, and the other half was located in Reading, which was not. Local lore says that the occupants would have to serve the liquor on the Reading side of the property.

John also points out that it may have been the original condominium after a second house was added to the structure in the 1820s; it was joined by the Norwood family in 1832. However, there was a period of time when two sisters occupied the property, each living in the separate homes. They had a falling out and kept the door locked between both homes. One sister fell on hard times financially and her side of the home was foreclosed upon.

A family tomb was begun on the corner of Lowell and Chestnut Streets by Joseph Tapley in 1820. Ironically, due to an unfortunate accident that year while hauling logs from Reading with his son, Jesse, he slipped on the ice, fell beneath the sled and was killed. Joseph was the first family member laid to rest in the tomb, though Jane points out that no remains exist in the tomb today.

The Captain Thomas Flint house at 272 Main St. was renowned as “the grandest house in town” when it was built circa 1720 after a fire claimed the original home. Capt. Flint built around the original chimneys and fireplaces, expanding the footprint to four rooms with post-and-beam construction on a granite foundation and adding a gambrel roof.

Eight rooms were added in 1773, with rifle closets at the front door and Indian shutters on the ground floor. Other original features include two beehive ovens and original hardware.

Owned by Bill Thompson and Frances Fleming since 1990, the home underwent a five-year restoration to return it to its original grandeur, with assistance of master builder and antique colonial expert Anthony Dell Isola of Lynnfield, before they moved into the home. This home was the subject of a feature story published by the Villager earlier this year.

The John Burnham House at 281 Chestnut St. was built circa 1780 on property Burnham purchased in 1775. It is said he built it to last and it remained in the family for a century, first being passed on to his daughter, Jerusha, and her husband, Bowman Viles, after his death, according to the tour guidebook.

To this day, the original bricks Burnham chose to support the chimney remain in place and original beams exist in many of the rooms. It has been the home of Shay and Lou Wainwright for the past year.

The Jesse Tapley House, 593 Lowell St. was built circa 1825 on land Jesse had inherited from his father Joseph in 1820, the year Jesse was honorably discharged as a captain in the Militia.

It is a two-story center entrance colonial featuring original flooring in the dining room and a keeping room with a beehive oven. Jesse and his wife Eliza resided there until 1831 when they sold it for $550, it states in the guidebook. The home is owned today by Maggie and Gregory O’Brien.