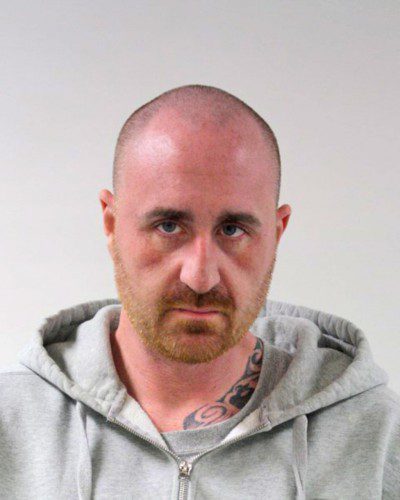 HINGHAM — Police have made an arrest in connection with the armed robbery that occurred at S&M Liquors on Water Street on the evening of Thursday, Oct. 8.
Last night, Wakefield detectives located the suspect, Stephen M. Wentworth, 35, in Hingham and took him into custody. He is believed to be homeless, according to police.
Wentworth was charged with armed and masked robbery, possession of a firearm used in a felony and carrying a firearm without a license.
Police have also located the gun used in the robbery and believe it to be a working rifle. The gun is currently being examined by State Police.
The robbery occurred just after 9 p.m. on Oct. 8, when an armed robber made off with an undetermined amount of cash after holding up S&M Liquors at 260 Water St. The robber was described at the time as a white man standing about 5 foot 9 with a slim to average build. A surveillance photo from the store’s cameras showed the suspect wearing light colored jeans, a gray and black hooded sweatshirt and carrying a long gun.
The suspect reportedly went right up to the cashier, demanding money before grabbing cash from the register and fleeing out the front door.
Police released few details on how the investigation unfolded or how they were able to locate the suspect.
“We are glad we were able to get this man off the street before he was able to do another crime in Wakefield or somewhere else,” said Wakefield Police Deputy Chief Craig Calabrese this morning.