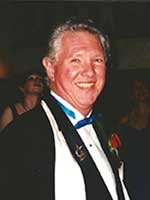 MELROSE — Arthur Tunnell of Melrose, a gregarious and beloved man with many friends, began his new life on Oct. 11, 2016, after succumbing to pulmonary edema precipitated by pneumonia and prostate cancer. He was 70 years old.

Friends appreciated that Arthur was kind, helpful, caring and lots of fun! He was at once very private and very intimate. He was also an independent soul who needed to do things his own way and on his own terms and friends accepted that easily.

For more than 25 years Mr. Tunnell, who was six foot two, remained active in the Tall Clubs International and traveled the world attending conventions and parties. One club member remembers him this way:

“He was the party guy, the dancer, the Mr. Volunteer, as well as being King of the Boston Beanstalks in 1998. He was also Man of the Year for Tall Clubs International in 2002 and was Mr. July in their 2009 “Men of TCI” calendar, a fundraiser that benefited the National Marfan Foundation. Arthur could put anyone at ease, a true gentleman. He had friends far and wide. He was well known in each state, Canada, and even in Europe. He touched a lot of lives and will surely be missed. This morning I heard a song on the radio that was so Arthur … “Celebration,” such a good dance song … he would have been on the floor.”

Another says: “Arthur had a unique gift for making everyone feel special. He would be the first to welcome a ‘newbie’ (into the Tall Club) and for many years kept a list for Valentine’s Day: he would send gourmet chocolates from ‘a secret admirer.’

Mr. Tunnell held and managed residential real estate most of his adult life, owning property in both the Boston area and in Southwest Florida. He worked several quarters for Ford Motor Company in Dearborn, Mich., as a co-op student in college, but did not find corporate life suited him. For a year or two, he drove cabs in the Boston area … long before Uber or Lyft … learning every shortcut in town. He also took a job as a guard at a minimum-security facility outside of Boston and in 1982 was made a Special State Police Officer by Massachusetts Governor Eduard J. King. He also served as an inspector for the Federal Emergency Management Agency.

Arthur, called Arty by his family, was born in Southampton, N.Y., the second of three children born to Amelia Hamilton Cornell Tunnell and Arthur Wesley Tunnell Jr., who both predeceased him. Shortly thereafter, the family moved to Sungei Gerong, Sumatra, Indonesia, and lived there for 10 ears. His father worked for an American oil company and later moved the family to other countries including Taiwan and Ethiopia, when he started working for U.S. State Department aid agencies.

In Ethiopia, the American school offered correspondence courses with the University of Nebraska Extension Division for grades 10, 11 and 12. Arthur completed course material at his own pace and found himself distracted by safaris and helping to manage a hotel out in the boondocks, far from the capital of Addis Ababa. At age 20, Arthur returned to the U.S. to attend college. He graduated from Northeastern University, Boston with a bachelor of science in business administration in 1971.

A private celebration of Arthur’s life was held on Sunday, Oct. 16, 2016. Those wishing to honor Arthur may make a memorial contribution to a favorite charity of their choice.