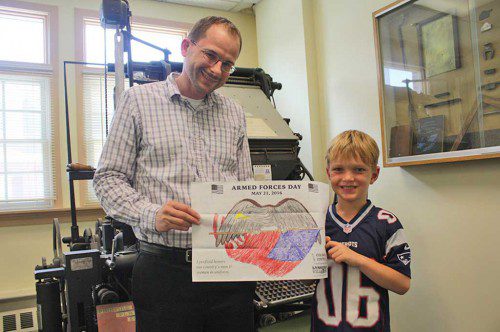 WITH AN ear-to-ear grin, 6-year-old Michael Barrett accepts his prize in the Villager’s coloring contest from John Keating, a graphic artist at the newspaper who designed the contest entry. Michael won a $50 gift certificate to Meletharb’s Ice Cream as the winner in the 6 and under age group. (Maureen Doherty Photo)

LYNNFIELD — It was a tough choice but the results are in. The two winners in the Villager’s first-ever coloring contest are Michael Barrett and Emilie Bell.

As an event sponsor of Townscape’s Geraniumfest and Kids Day event May 21, the Villager ran the coloring contest with a theme to celebrate Armed Forces Day, which happened to occur on the same day as Kids Day. John Keating, one of the graphic artists at the newspaper, selected a patriotic theme of an American Bald Eagle grasping an American flag in its talons as the subject for the kids to color. 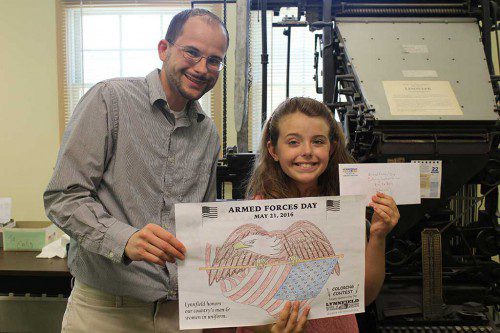 Both budding artists were presented a grand prize of a $50 gift certificate to Meletharb’s Ice Cream in Wakefield along with a one-year gift subscription to the Villager for their parents. Michael is the son of Chris and Beth Barrett. Emilie is the daughter of Matthew and Adrienne Bell.