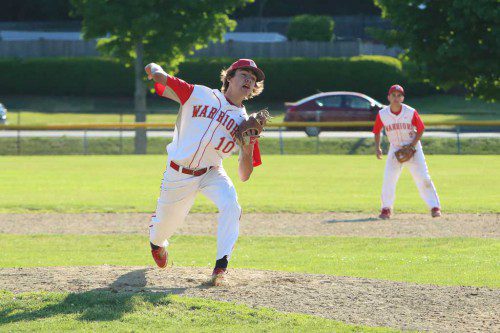 RELIEVER John Evangelista (#10) pitched well for the final two and one third innings for the Warriors while second baseman Mike Caraglia (#5) had an RBI triple in the seventh inning in Wakefield’s Div. 2 North first round tournament game. (Donna Larsson Photo)

WAKEFIELD — No matter what the score has been this season, the 2015 Warrior baseball team hasn’t gone down without a fight.

Wakefield trailed 4-0 headed into the last of the seventh inning and showed that it doesn’t quit as it rallied for two runs with two outs and had two runners on base and the potential winning run at the plate.

But any dreams of a dramatic comeback win were dashed with a pop up to second as the Warriors dropped a 4-2 game to Concord-Carlisle in a Div. 2 North first round matchup before a couple of hundred fans in attendance at Walsh Field.

The Warriors trailed the Patriots by a 4-0 score when they made things interesting in their final at bat.

Andrew Patti got his second hit of the game with a double to left field. After a strikeout and a ground out in which Patti advanced to third, a passed ball brought in the senior with Wakefield’s first run. Neil Fitzgerald, a senior, worked a walk and scored on a triple to deep right field by Mike Caraglia, also a senior.

Corey Imbriano then worked the count and drew a walk to put runners at the corners. But on a hit and run play, a pop up to second base ended the game and Wakefield’s season.

“Unfortunately, we came up short. Our season went a lot like that when we rallied late,” said Coach Keith Forbes. “But when you play good teams in the state tournament, coming back like we have is much more difficult to do. We had a hit and run on but the ball was right at the second baseman and didn’t fall in. It is tough to play from behind. Against some of the teams in our league that weren’t as strong, we were able to capitalize on some mistakes.”

“Their pitcher, Spencer Meyer, pitched a great game,” said Forbes. “He was able to get his curve over and he got ahead in the count. We didn’t have many runners in the first six innings. When we did get them on there were two outs. Meyer got the outs when he needed to.”

“Andrew has pitched well for us this year but today he wasn’t his best,” said Forbes. “He was not as sharp as he has been but he battled. Their first baseman (Bryce Dion) had two big hits for them. Concord-Carlisle plays in one of the stronger leagues and faces some Div. 1 teams. They’re well coached and they had the big hits. They definitely outplayed us.”

The Patriots (11-10) scored a run in the first inning, one in the third and two in the fourth.

In the first, Peter Upham singled to right field with one out. Upham stole second base, took third on a ground ball and came around and scored on a base hit to left field by Dion. Jack Kingsman then walked but a fly ball to right field ended the frame.

Concord-Carlisle added another run in the top of the third inning. Upham was hit by a pitch and stole second base. With two outs, Dion lined a base hit to left field to bring in Upham.

The Patriots scored two more runs in the top of the fourth to extend their lead to 4-0.

Auld walked Upham and then was lifted in favor of Joe Stackhouse who induced fly ball to right field for the third out. But the damage was done as the Patriots led 4-0.

Stackhouse got the first two outs of the fifth inning but ran into trouble after that. The senior left-hander walked Bailey and Meyer singled into right field. Pinch-hitter Nick Yelle walked to load the bases as Wakefield went to the bullpen once again. John Evangelista, a JV call up, struck out the final batter to end the fifth inning.

Evangelista, a sophomore right-hander, pitched the final two and one-third innings giving up no runs and no hits while striking out six batters and walking none.

“He pitched well and kept us in the game,” said Forbes.

Wakefield, meanwhile, didn’t have many chances over the first six innings as Meyer surrendered just three hits prior to the last inning.

Patti singled to center field in the second with one out but was caught trying to steal second base. In the third, Tighe Beck drew a leadoff walk but was caught stealing as well when Meyer fired a pickoff throw to first base.

In the last of the fourth, Shawn Smeglin walked and took second on a ground ball. Matt Mercurio also walked with two outs but a ground ball to third ended the frame.

Fitzgerald hit a two out double in the fifth inning and Anthony Cecere, a senior, singled to left field with two outs in the sixth. Cecere stole second base and took third on a throwing error by the catcher, Bailey. But he was left stranded there.

Wakefield attempted its comeback in the seventh and got halfway there before the final out was recorded to end the contest and one of Wakefield’s best seasons ever. The Patriots, meanwhile, advanced to the quarterfinal round and will face Lynn Classical (4-0 winners over Winchester) on Monday at 4 p.m. at Fraser Field in Lynn.

“We had a successful year,” said Forbes. “We’ll learn from this and get better for next year. We’re not happy how the season ended.”

The Warriors have many underclassmen that will be back next year for another tourney run. However playing their final games in WMHS uniform were Caraglia, Cecere, Fitzgerald, Luke Martin, Patti, Smeglin, Stackhouse and Joe Greer.