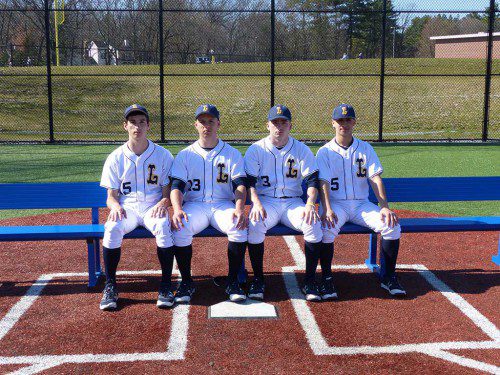 LYNNFIELD — They’re sizzling hot. The baseball team is on fire as the Pioneers stretched their win streak to nine games by posting three more games in the win column last week.

Lynnfield defeated Triton 13-8 last Tuesday followed by a 2-1 win over Arlington Catholic on Thursday, which qualified the Pioneers for a state tournament berth.

They rounded out the week with a 5-3 victory over Pentucket in the first Pete Frates Tournament to benefit ALS research on Saturday at Fraser Field in Lynn. This win improved the team’s overall record to 11-3 and its record within the large school Kinney Division of the Cape Ann League to 10-3.

Head coach John O’Brien attributes his team’s success to the solid contributions made by all of his players, from the starting line up to the end of the bench, adding that it starts with the senior leadership.

O’Brien attributes his team’s current nine-game win streak to the frustration the players felt after losing two close games in a row, a one-hitter and a two-hitter, early in the season.

The players turned that frustration into inspiration and haven’t looked back since the streak began April 23.

“Ryan Sheehan, my assistant, has done a great job with the kids, working extra on hitting, so more guys are starting to hit the ball instead of the same two or three. It’s been a much more balanced lineup. Every day, every game, there is someone else who contributes,” O’Brien said.

“The pitching has been pretty good and the seniors have been outstanding. When we lost three games they just stuck together and kept working and playing hard. And we got a few breaks and made some breaks ourselves to get the bats going,” added O’Brien.

Participating in the Pete Frates ALS Tournament was an honor for the team. He said the fundraiser at Lynn’s Fraser Field was a success. The tournament was held Friday night and Saturday, with Austin Prep and Bishop Fenwick playing the opener on Friday followed by three more games on Saturday. In addition to Lynnfield competing against Pentucket in the morning, Danvers competed against Essex Tech while Matignon faced Malden Catholic in the afternoon.

O’Brien said the organizers sold sponsorships in a program book to raise money. “They had a good crowd. They did very well. They are going to do it again next year. I had already told them I would love to play it again, so hopefully, we’ll be invited back,” O’Brien said.

O’Brien said Frates’ alma mater, Boston College, was represented at the game. Frates played for the Eagles from 2004 to 2007 and BC recently retired his number 3 jersey. The first pitch of the game was thrown out by a man who has ALS.

“He was terrific. It was a good day for a great cause,” O’Brien said, noting that he waited until after the game was over to tell his players that his own mother had died from ALS, also known as Lou Gehrig’s Disease.

Winning the game 5-3 was the icing on the cake.

“Fernando Gonzalez pitched a complete game. He gave up seven hits, struck out nine and did a great job,” O’Brien said.

In the first inning shortstop Justin Juliano opened with a single. He was followed by third baseman Mike Stellato who also singled. Catcher Dan O’Leary earned the first RBI of the game on a fielder’s choice, then third baseman Spencer Balian hit a 2 RBI double, he said. “We got three runs there.”

The Pioneers had a scoreless second inning but in the third, they got two more runs to take a 5-0 lead into the seventh inning.

“Juliano opened the third inning with a double. A ground out by Stellato moved Juliano over to second, followed by a hit batsman on O’Leary,” he said. “Balian followed up with another RBI single and left fielder Bryant Dana had an RBI double. That was the scoring for us and then they got three runs in the last inning,” O’Brien said.

He credits Fernandez with maintaining his composure on the mound throughout the game, even after the Sachems closed the gap with three runs in the seventh.

“They were just able to get the bat on the ball and we made one error that inning and that opened the door for them a little. But they hit the ball,” O’Brien said of Pentucket. “It’s a very good team. They’re always well-coached. They hung in there. They were down five to nothing and then they came back in the seventh,” O’Brien said.

However, Gonzalez was not giving up. “He ended up shutting the door. He struck out the last kid they had in the game with runners on first and third,” O’Brien said.

The team’s 2-1 win over Arlington Catholic last Thursday was Lynnfield’s first non-league game of the season.

O’Brien said, “That was a good win for us against a good program and that got us into the state tournament, so that was extra motivation. Nick Aslanian pitched and he did a fantastic job.”

Arlington Catholic scored one run in the second inning. The score remained 1-0 until the bottom of the fifth, when Lynnfield scored its two runs.

“Second baseman Tom Anastasi had a lead-off double and center fielder Nick Colucci sacrificed him over to third. Right fielder Nick Theophiles earned an RBI double and then Juliano got the single,” O’Brien said.

“Aslanian only threw 87 pitches in seven innings, gave up five hits and no walks. It was a great game. The guys behind him turned two double plays. It was a good effort all around. He pitched terrific,” O’Brien said, adding that not giving up any walks was “key.”

“We played good defense behind him and we got a couple of timely hits and we were able to get out of there with a win,” he said. It will be the only regular season game the Pioneers play against Arlington Catholic.

The Pioneers pounded Triton 13-8 May 17 in what O’Brien acknowledged, “wasn’t our prettiest game.”

“We walked too many people and we made some mistakes in the field. They capitalized on them and kept themselves in the game. Eventually we had a couple more big hits. O’Leary had a three-run home run,” O’Brien said.

“We hit the ball, I just don’t think we played as well defensively as we should have. We walked too many people,” he said.

Lynnfield’s next two games in a row are against Masconomet, played Tuesday, after press time, and Newburyport on Thursday. In their previous meetings, the Chieftains took the 1-0 win while the Clippers got the 2-1 win over Lynnfield.

O’Brien remains optimistic that Lynnfield can beat both of these teams and has a potential shot at earning the league title if several factors fall into place.

“This particular year the league is pretty even. I think anybody can beat anybody. If we play well, we’ll have a shot. We can’t walk people, and we need to get a couple of clutch hits,”

“We got to make the plays in the field behind the pitcher. Every game, it has been there, so we need to take advantage of it,” he said. Colucci will get the call to the mound against Masconomet. “He’s a senior. It’s a big game. It’s his turn in the rotation. He’s pitched very well this year,” O’Brien said.