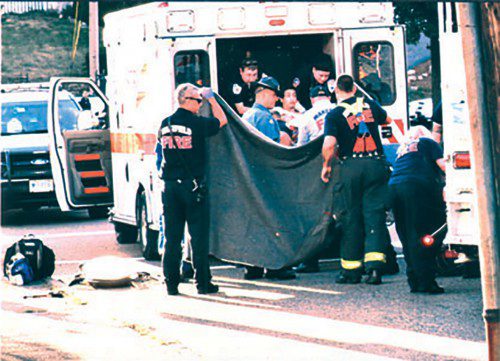 WAKEFIELD FIREFIGHTERS and Action Ambulance EMTs remove the victim of yesterday’s Breakheart stabbing from the ambulance before carrying him on a stretcher to a waiting MedFlight helicopter on Walsh Field for the flight to Beth Israel Deaconess Medical Center in Boston. (Don Young Photo)

WAKEFIELD — An altercation in Breakheart Reservation late yesterday afternoon sent an 18-year-old Beverly man to a Boston Hospital by MedFlight helicopter with a serious stab wound while the alleged assailant was captured in a stolen car by local and State Police after speeding down Water Street and crashing in front of The Farmland at Main and Water streets.

Wakefield Police officers arrived at Breakheart Reservation in the area just beyond the Wakefield entrance off Hemlock Road just before 5 p.m. to find an 18-year-old man who had the shaft of a broken golf club stuck through his upper chest. State Police from the Danvers Barracks also responded as Breakheart is State-owned land.

Wakefield Firefighters were dispatched to the scene at 5:07 p.m. According to Fire Chief Michael Sullivan, they found the victim conscious and alert just inside the gate to Breakheart with the club end of a broken golf club all the way through his chest. Firefighters helped stabilize the victim. It was determined that it was best not to try to remove the golf club in the field, Sullivan said.

Emergency medical personnel had to exercise extreme caution in treating and moving the victim, due to the fact that the golf club shaft was still in his chest. He was placed in an ambulance, which was driven slowly down Hemlock Road to a waiting MedFlight helicopter on Walsh Field. The victim was flown to Beth Israel Deaconess Medical Center in Boston with what were initially believed to be life-threatening injuries. He is now expected to survive.

Meanwhile, Wakefield Police received reports of a black SUV being operated in an erratic manner on Water Street followed by a call at about 5 p.m. of a crashed SUV at Main and Water streets in front of The Farmland. Responding Wakefield Police found a man sitting on a bench wearing a ripped blue shirt. The man appeared lethargic and slow in his movements and admitted to police that he had taken a quantity of drugs.

State Police arrived and confirmed that the man was their suspect in the Breakheart stabbing. The suspect, identified as 18-year-old Curtis Day of Beverly, allegedly became agitated and resisted arrest before police were finally able to place him in handcuffs and put him in a State Police cruiser. He was expected to be arraigned today in Malden District Court on charges of assault with intent to murder.

The SUV was allegedly stolen by Day from a home on Stone Way, a street off Farm Street that abuts Breakheart Reservation. Day will also face the stolen vehicle charge. After his arrest, the SUV was towed to State Police barracks in Danvers.

State Police have not released the name of the victim or any information about why the men were in Breakheart Reservation or what may have transpired that led to the assault. Another male was reportedly also with the pair when the incident occurred. They said evidence indicates that the stabbing was not a random attack and that the victim and the suspect were known to each other.

Wakefield Police also reassured the public that the assault appears to be an isolated incident between individuals known to each other and there is no threat to the general public.

“Breakheart Reservation is still safe,” Wakefield Police Lt. Steven Skory told the media at a briefing just inside the Wakefield entrance to the Reservation at about 7 p.m. Tuesday. “It’s a great place for people to come and walk and enjoy themselves in the summer,” he said.