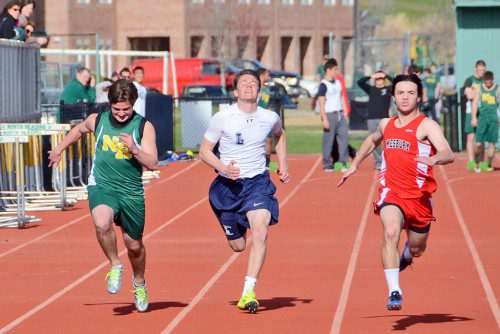 SPRINTER Evan Battaglia (white) battles it out in the 100m race against North Reading and Amesbury opponents. He also runs the anchor leg on the state-qualifying 4x100m relay team and recorded a split of 10.66 in the team’s 46.43 victory over Ipswich last week. (John Friberg file photo)

LYNNFIELD – Sophomore Brendan Bey had a day for the record books in the boys’ track meet against Pentucket and Ipswich last week.

In the opening event of the meet, the 400-meter hurdles, he set a new school record with a time of 61.9 seconds. En route to that milestone, he earned first place against his Pentucket opponent and second place against his Ipswich opponent. It was the only first-place finish Lynnfield would earn against the Sachems.

Later in the meet, Bey captured first-place again, this time in the 400m with a time of 54.6 seconds against Ipswich while taking second against Pentucket.

Not to be outdone, Cam DeGeorge continued his dominance in the throwing events, earning first in the discus (103-10) against Ipswich and third against Pentucket. Teammate Phil King (90-10) grabbed second against Ipswich.

The 4x100m relay team of Cam Rondeau, Drew McCarthy, David Adams and Evan Battaglia defeated Ipswich in 46.43. They are now 4-2 on the season in the event.

The boys did not pick up a team win against their much larger opponents as they lost to Ipswich 98-45 and lost to Pentucket 101-25.

The team had one more opportunity to pick up a meet victory when they competed in the final tri-meet of the season against Hamilton-Wenham and Triton on Tuesday (after press time).