Boy skaters get their point across 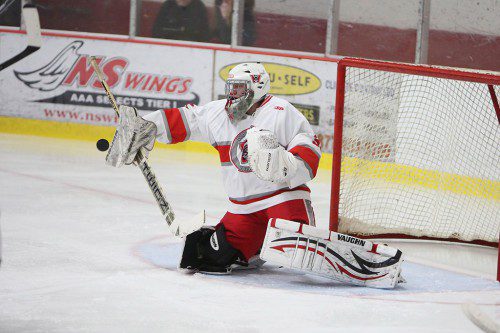 SAUGUS — The Wakefield Memorial High School varsity boys’ hockey team took to its home ice again Saturday after dropping their opening game of the season against Lexington in the middle of the week.

The second home game at the Kasabuski Arena proved to be a much better contest as the Warriors played Reading to a 0-0 tie.

Coming off a tough loss in the home opener, it was out of the frying pan and into the fire as the Warriors welcomed the reigning Div. 1 state champion Reading Rockets to the Kasabuski.

The Rockets lost their opener to Burlington, so they were hungry for a win coming into this one. They surely weren’t expecting to have such a tough assignment when they looked at their schedule and saw Wakefield in game two.

It was the second Middlesex League game for Wakefield under new head coach John Pellerin and the effects of the implementation of his philosophy has already begun to show early in the season. His Warriors were able to skate Reading even and came out with the scoreless draw.

After the game, coach Pellerin, who missed the opener due to the death of his father, reflected on what this result means for his team at this point in the season.

“To come out and give an effort like this is a big thing for the team itself,” the coach said. “It was a total team effort tonight. We were doing very well with every aspect of our game tonight.”

Pellerin has stressed discipline to his team, an area that they struggled in a year ago. On Saturday night, the Warriors were able to keep the penalties to a minimum and stay at even strength against the Rockets.

“We’re stressing discipline and it was a key to the game that we played 5 on 5,” Pellerin said. “We have to be disciplined. We have to stay out of the box. If we give up these odd man situations it’s going to put us in a big hole. Tonight we did that, we played well, we kept everything in check. So that allowed us to stay level.”

Only twice was the penalty kill unit called upon for Wakefield to snuff out an odd-manned attack, both times successfully, each time for 1:30 of a minor penalty. The first penalty came with just under three minutes to go in the second period and then they were shorthanded again to start the third period.

Wakefield did a good job to be aggressive on the forecheck throughout the game but specifically in the first period and it set the tone for the rest of the night. The Warriors were able to keep Reading’s forwards away from goalie Ben Yandell’s net and keep the shot count down for one period anyway.

There was a moment of heart-in-mouth defending for Wakefield toward the end of the first period with just less than four minutes to go for as a flurry of Reading shots from all angles and distances forced Yandell to make four or five saves in a matter of seconds.

After a period of feeling each other out in the first, play opened up a bit more in the second period with each team taking aim and firing more shots flying toward the nets. However, each time the puck met a goalie’s mitt or pad and the puck never made it into either net for the duration of the game.

Reading was superior as a team and was really able to dictate where the play was going on the ice. The Rockets had more size and skill but were outmatched in the hustle and quickness department by the Warriors.

Wakefield needed to be pre-emptive with its aggression toward loose pucks and battles in the corners. The Warriors did very well to maintain their intensity level throughout the entire three periods and made Reading aware that if it wanted to get anything from them that night they would have to earn it through hard work.

With time running out in the third period, Yandell proved too tough for Reading to beat and Wakefield got some clutch face-off wins down the stretch to stifle Reading and get the 0-0 draw.

The only person on the ice that worked harder than the Warrior defense was goalie Yandell, a junior. Despite their best effort to keep Yandell’s pads clean, the Rockets still outshot the Warriors nearly 2-1.

The defense did very well to block a number of attempts in all three periods before they had a chance to threaten Yandell in net. As the game went along however, Reading started to come closer and closer to scoring.

Reading’s goalie Josh Caruso stopped all 16 of the Wakefield attempts on target, while Yandell was stellar for Wakefield stopping all of Reading 30 tries at goal.

Nothing could get by the Warriors’ junior stopper and the scoreboard ended with a pair of zeros showing. It was a huge result for the Warriors after the struggles the team went through a year ago, especially since Reading had such success last season.

The ever forward thinking coach Pellerin realizes that it is a new season for everyone, not just his team but they must remain vigilant in their pursuit of improvement.

“What happened last year was totally different than what goes on this year,” the coach said. “Everybody graduates players and everybody’s team becomes a new team.”

With this Warrior team, most of the players are not different from a year ago but on the ice their play has visually matured. The difference in maturity level is most noticeable with the lack of shorthanded opportunities the team gave away on Saturday.

The Warriors will have some time to work on their game, as they don’t skate again until Dec. 29 in the Kasabuski Holiday Tournament. Coach Pellerin is hoping his team will continue to take steps to improve the way its did against Reading.

“We’re building on it,” he said. “We had a tough one Wednesday night, we didn’t do a lot of things well. We’re back, we retooled and put some things in place and now we have to build upon what we put in place to become a better team. Our goal is to be better now, better in the middle and better at the end.”

First Period — No Scoring. Penalties — None.