Warriors play Lynnfield to a 1-1 tie 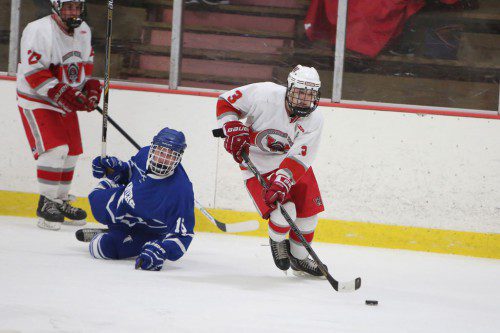 ZACH SALAMONE, a senior forward (#3), scored Wakefield’s lone goal yesterday against Lynnfield. In the back is junior defenseman Steven Melanson (#27). The Warriors and Pioneers played to a 1-1 tie in the consolation game of the South Division in the Kasabuski Christmas Tournament.
(Donna Larsson File Photo)

SAUGUS — The Warrior boys’ hockey team scored its first goal of the season. However its first victory will have to wait until the new year.

Wakefield played Lynnfield to a 1-1 tie in the consolation round of the South Division of the Kasabuski Christmas Classic yesterday afternoon at the Kasabuski Arena.

The Warriors are now 0-2-2 overall after four games and are still finding their way in the early going with a new coach and a new system in place.

Wakefield did play a better game against the Pioneers (also 0-2-2) than they did against Danvers in the opening round. Wakefield did have more possession of the puck in the Lynnfield zone and got off more shots on net. The Warriors stayed out of the penalty box and played a much more disciplined game.

However putting the puck in the net is the one area that the Warriors need to improve if they are going to be successful in the Middlesex League Freedom division.

“We’ve struggled to put the puck in the net,” said Coach John Pellerin. “We played better offensively today than we did yesterday (against Danvers). Offensively, we’re still having trouble putting the puck in the back of the net.”

Wakefield’s goal came at 7:20 of the second period off a scramble in front of the net. From the left post, senior forward Zach Salamone knocked in the loose puck for Wakefield’s first goal of the year. Assisting on the play were senior forward Nick Hill and senior defenseman Dom Bruno.

“We don’t have that natural sniper, so our goals are going to have to come from hard work,” said Pellerin. “The goal we got today was like that. That’s the type of goal we have to score.”

“Our defense and Ben Yandell played a good game today,” said Pellerin. “We got another point. We had our chances and sent the puck toward the net. We need to do a better job getting the puck in the net.”

The Warriors controlled play in the first period as they outshot the Pioneers, 9-4, and had the puck in the Lynnfield zone most of the time. Wakefield’s best bid to score came when junior forward Zach Kane was denied from the left post on an odd man rush.

Despite carrying the play, Lynnfield scored the lone goal of the period at 12:56. From the right post, an open Jack Ganter, a junior, knocked the puck past Yandell while crashing the net. Junior John Percoskie and junior Robert LoConte earned the assists on the play.

In the second period, Lynnfield outshot Wakefield, 10-6, and carried more of the play than it did in the first.

The Pioneers had a flurry of shots at the beginning of the frame from junior Derek Crampe and junior Daniel O’Leary but both were denied by Yandell who made some brilliant saves to keep the game at 1-0.

Midway through the period, the Warriors tied the game on Salamone’s goal to make the score, 1-1.

Later in the period, Wakefield had 2-on-0 rush but Pioneer goalie David Langone, a sophomore, denied the Warrior shooter on the play. As a result the score stood at 1-1 at the second intermission.

The third period was pretty evenly played as Lynnfield held a slight edge in shots, 9-8. Both teams were trying to get the game-winning goal but neither did.

Coccoluto had a rush down the left wing but was denied on one of Wakefield’s better chances. Lynnfield had some opportunities as well but Yandell and the Warrior defense turned every bid away in the final 15 minutes as both clubs earned a point.

“We’ll have a couple of days of practices and get ready for Stoneham,” said Pellerin. “We’re coming along but we need to find the space in the back of the net. It seems like when we get a good shot, the goalie is right there. We’re going to be in tight games if we can’t score multiple goals. Defensively we need to be sound and work hard on offense.”

Wakefield will be hoping for multiple goals and a winning result when it takes on Stoneham on Saturday afternoon at 4 p.m. at the Stoneham Arena.