Boys’ cross country team puts on quite a show at M.L. Championships 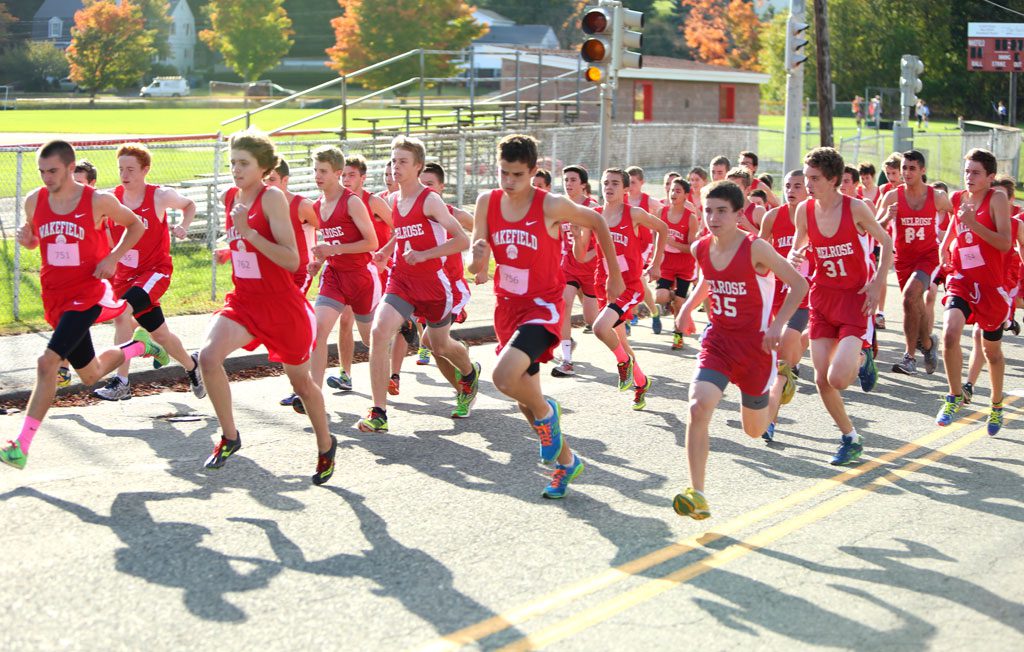 WOBURN — In dual meet competition, teams from the Middlesex League run against clubs from their own division and have two non-league meets against a pair of squads of the other division. However in the Middlesex League Championships, runners from all 12 M.L. schools compete in the same meet.

The Wakefield Memorial High boys’ cross country team had a good showing against its M.L. brethren as it captured fifth overall on Monday afternoon at the Woburn Country Club.

The Warriors scored 139 points in the team scoring and did better than four of its M.L. Freedom division rivals. Wakefield also scored better than three M.L. Liberty division teams.

There were some great individual performances by the Warriors in the meet.

Jackson Gallagher, a senior co-captain, had an outstanding eighth place showing with a fast 13:15.70 over 2.5 miles.

Coach Perry Pappas felt it was amazing that, although Gallagher’s greatest strength lies in events like the 400, 600 and 800 meters on the track, he was able to show his range and toughness in a hilly cross country race and compete against many great distance runners in the league.

Sophomore Jack Stevens ran a great race placing second for the team and 29th overall. Stevens posted a time of 14:06.90.

Juniors Richie Custodio and Alec Rodgers followed Stevens immediately after and sophomore Ryan Sullivan was just a few places behind.

Chris Skeldon, a junior, rounded out the varsity runners for Wakefield. Skeldon finished in 68th place out of 82 runners and posted a time of 15:18.00.

The Warriors that competed in the Boys’ JV Race race ran well and placed fifth as a team and was the first among Freedom division teams. Wakefield scored 117 points.

The JV was led by junior Tyler Whipple who captured 18th place overall with a time of 15:04.60.

Juniors Adam D’Ambrosio and Jeremy Keegan also ran well to round out the scoring for the Warriors in the JV race. D’Ambrosio finished in 31st place at 15:22.70 and Keegan came in 32nd with a time of 15:23.50.

The Warriors had 10 more runners entered in the JV race.

The best team performance came in the Freshman Boys’ Race as the new crop of Warrior runners had a fantastic day placing three runners in the top 10. The freshman course was 1.3 miles.

Matt Greatorex chased three Lexington boys and finished fourth with a time of 6:47.00, well ahead of the 7:00 winning time from last year.

The Woburn Country Club has been the site where the league championship meet has been held for over 40 years. With the split in the league three years ago into two tiers, the M.L. meet gives all teams a chance to face off against the other 11 teams which isn’t done in dual meet competition anymore.

The Warriors will travel to Wrentham this Saturday for the MSTCA Coaches Invitational. That meet is at the Wrentham Developmental Center.

On Saturday, Nov. 8, Wakefield will be back in Wrentham to compete in the Eastern Mass Div. 4 meet.