Warriors will compete in Div. 2 race on Saturday in Gardner 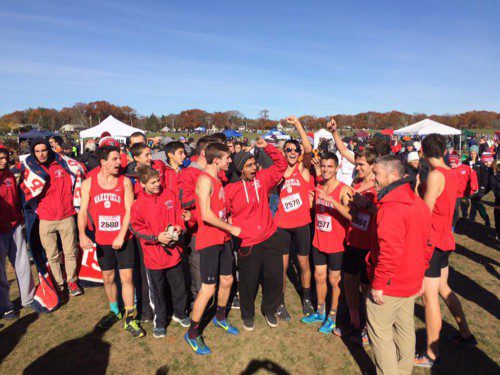 THE WARRIORS celebrate their Div. 4 Eastern Mass. title last Saturday. Wakefield will be trying to bring home a Div. 2 All-State title this weekend.

GARDNER — The Warrior boys’ cross country team won the Eastern Mass. State Meet for the first time since 1982 with a historic performance in Wrentham. This Saturday, Wakefield can added another chapter to its storybook season.

The Warriors have qualified and will compete in the Div. 2 All-State boys’ meet which will be held tomorrow afternoon at 2:30 p.m. at the Gardner Municipal Golf Course.

The Div. 2 All-State Meet will consist of teams from Divisions 4, 5 and 6 from Eastern Mass. and Division 2 from both Central and Western Mass. There are a total of 20 teams that have qualified.

There are also individuals from 37 other schools that will be running as well.

The Warriors had the impressive score after totaling their top five runners’ positions. Their total was well below second place team Melrose, which had 99 points.

Tewksbury placed third with 101 points and Westwood placed fourth with 157 points. Duxbury was fifth with 166 points, while Burlington was sixth with 182 points. There were 23 scored teams in the race. There were 162 runners from those teams.

The Warriors captured the title last weekend and did so in dominating fashion as all five scorers placed in the top 21.

Greatorex became the first Wakefield champion since Kevin Crowley in 1972. His winning time was 16:19.23 over the 5K rolling course.

The rest of the Warriors were also amazing in the biggest meet of their season last Saturday.

Lucey ran an astounding 40 second personal best on the Wrentham course to finish in seventh with a time of 16:47.21.

Sullivan ran a hard fought race and toughed out a 21st place finish in 17:06.59 to help the Warriors secure the title.