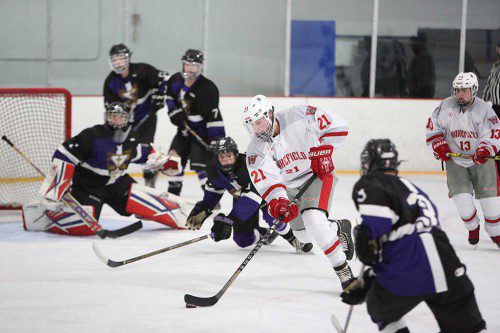 SEAN MCNALL, a senior forward (#21) scored a hat trick to lead the Warriors. McNall scored two goals in the first period and added his third in the final period in Wakefield’s 7-2 win over St. Peter-Marian last night at the Stoneham Arena. (Donna Larsson Photo)

STONEHAM — The Wakefield Memorial High varsity boys’ hockey team was back in action on Thursday as the Warriors hosted the St. Peter-Marian High School Guardians at the Stoneham Arena.

The teams were two years removed from their previous match up, when they played to a 3-3 draw. With many familiar faces on the ice yesterday, the Warriors showed how they had improved over the last year and a half, as they flexed their muscles in a 7-2 victory.

“They were a good team,” head coach Chris Gianatassio said following the team’s first win of the year. “It was a lopsided score, but they had a lot of good opportunities. Tyler (Pugsley) definitely kept us in it going the right direction.”

Senior forward Sean McNall was the star for Wakefield as he was the hat trick hero of the day. His first two goals secured a 2-0 lead after the first period, and with the game well in hand, he added an emphatic slap-shot to seal the victory in the third period.

“Sean had a hat trick, so we’re really happy for him. He’s been working hard, it’s nice he can get rewarded,” Coach Gianatassio said after the game.

The Warriors had no trouble scoring, but had some difficulty staying out of the penalty box, racking up seven penalties with three in the first period. Luckily for Coach Gianatassio, the Warriors were adept at killing off the penalties, with St. Peter-Marian scoring just one power play goal, on the very last of the infractions in the third period.

“Our thing was stringing together 3 full periods, and we did that. We put a full 45 minutes together. We’re happy with the outcome and we’re going to build off of it,” he said.

The second period was the Warriors’ best with goals from Anthony Forziati, Braedan Langlois, and Cam Souza. The goal for Souza was the freshman’s first as a varsity player.

The Warriors only were called for one penalty in the frame as well.

Wakefield kept the pedal down in the third period, scoring two more times with McNall’s final goal of his hat-trick coming just three minutes into the period.

Senior Justin Sullivan wrapped up the scoring with just under four minutes to play with his first goal as a varsity player.

It wasn’t all offense for the Warriors as coach Gianatassio pointed out.

“A lot of guys contributed, from top to bottom, everyone played. and everyone chipped in.”

The team played well from front to back, as junior goalie Pugsley had to deal with a number of odd-man rushes and power-play attacks from the Guardians. The Warrior goalie made 14 saves on 16 shots, also keeping the Guardians to just 1-for-7 on the power play.

The win was the Wakefield’s first of the season, having lost three and tied ne previously.

“We’ve been working hard, it feels good to get the first win,” the coach said. “The kids have worked hard and they earned it so it’s a good feeling. It’s good to see the hard work paid off.”

The team will be back in action on Saturday as it will take on Beverly at 12 noon in the Stoneham Arena, looking to improve upon their 1-3-1 record.

“Every game is a hard game. There are no easy games. Every game is a challenge, so we’re going to enjoy this one for tonight and go back to work tomorrow and practice.”