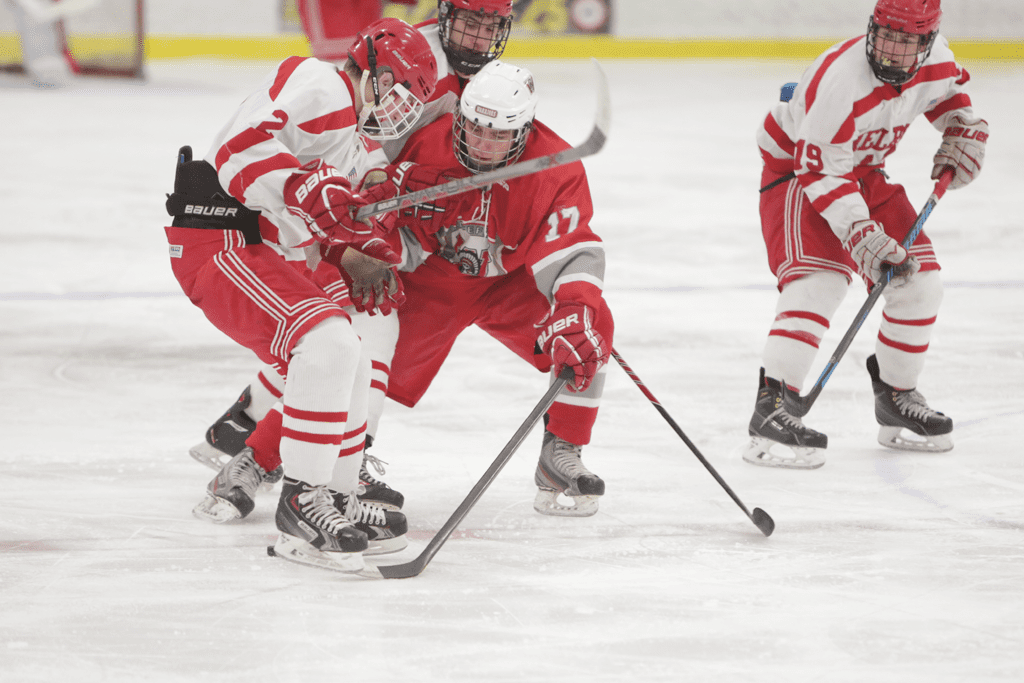 NICK HILL, a senior forward (#17), and eight other seniors played their final game in a Warrior uniform. Despite a good effort, Wakefield dropped a 3-1 game against Watertown. (Donna Larsson File Photo)

WATERTOWN — The Warrior boys’ hockey team may have scored first but Watertown wound up getting the last laugh in the form of three unanswered goals to hand Wakefield a 3-1 loss in the season finale last night at the John Ryan Skating Arena.

The Warriors wrapped up the 2014-15 season with a 2-14-4 overall record and 2-12-2 record in the Middlesex League Freedom division. While Wakefield didn’t get as many victories as it would’ve liked, the Warriors did improve slightly over the one win campaign they had a year ago.

Wakefield held the 1-0 lead until Watertown, which has clinched a tournament berth, scored a power play goal in the second period to tie game at 1-1.

The Red Raiders scored later in the second period to take a 2-1 lead at the second intermission.

The score remained 2-1 until Watertown scored an empty net goal with 26 seconds left to seal the victory.

“In the third period, it was all Wakefield,” said Coach John Pellerin, who completed his first season as head coach for the Warriors. “We hit a crossbar and the post a couple of times.”

Freshman goalie Tyler Pugsley was in net for the Warrior and he made 30 plus saves.

“Tyler Pugsley did a very good job and he has a bright future in the Middlesex League,” said Pellerin.

The Warriors will miss the seniors graduating but they do return some underclassmen next year. Also, the JV boys’ hockey team had a solid season with an 11-3-4 so Wakefield will have some prospects coming up. There are also eighth graders that will be entering high school and they could be candidates as well to help with the varsity, if not next year, then two to three years down the road.

“Overall, we made some good strides,” said Pellerin. “We made a few mistakes and in the Middlesex League you can’t do that. We need to play a full 45 minutes. We’ll build on from the year. The kids worked hard and never quit.”