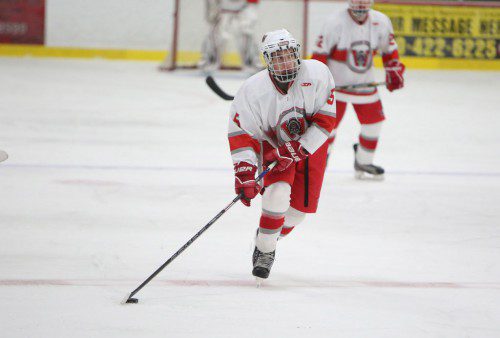 STONEHAM — The Wakefield Memorial High School varsity boys’ hockey team played a non-league game against St. Peter-Marian Catholic High School in what was a rescheduling of a game that was set to be played earlier this month.

Wakefield came into the night winless on the season but hoped that facing some different competition would help get the Warriors in the win column.

Unfortunately for head coach John Pellerin’s side, a victory was not in the cards as the Guardians came from two goals down in the third for a 3-3 final score last night at the Stoneham Arena.

After the game, Assistant Coach Chris Gianatassio said, “We came out strong and we dominated the first two periods. We had a lot of guys step up. That was big.”

In the first period it was all Wakefield as its offense was relentless and the Warriors kept the puck in their offensive zone nearly the entire period.

The Warriors came out firing to the tune of 12 first period shots. However, St. Peter’s sophomore goalie Nathan Pickett was outstanding and for 14 and a half minutes, stifled the Warrior attack.

Wakefield was persistent and it paid off near the end of the period when junior Steve Marino got the opening goal. Zach Salamone and Dylan Melanson were credited with the assists on the Marino goal and the Warriors had all the momentum on their side in the locker room during the first intermission.

“We created more offense and had a little bit more confidence,” Gianatassio said. “As a team we have to come together and put together three full periods.”

After the break it was more of the same, as the Warriors came out letting shots fly. In the second, Wakefield snapped off 15 shots and 14 times Pickett stood in the way and denied a goal to the hosts.

The Warriors attack wouldn’t let up and just under five minutes into the second period, James McAuliffe doubled the lead for Wakefield. Unfortunately the Warriors failed to score again in the period.

“We just couldn’t capitalize on our chances,” Gianatassio said.

All the while for the first 30 minutes of the game, Wakefield goalie Ben Yandell had very little to do at his end of the ice. Aside from the occasional trip into his zone that produced maybe one or two efforts from the Guardians’ attack, Yandell was largely unchallenged for the first two periods.

After being forced to make just seven saves in the first two periods, Yandell was in for a wake-up call in the third period.

With a two goal lead, Wakefield entered the third period, not knowing the nightmare that awaited it.

In the opening minute of the third, while on the power play, St. Peter-Marian’s Matt Panarelli got the better of Yandell to make it 2-1 Wakefield.

Less than a minute had passed on the ice, when Wakefield responded with a goal of its own to make it 3-1.

This time Joe Stackhouse ripped a shot from the point that beat Pickett glove side and crept in just under the crossbar, Bryan Noyes was credited with the assist.

With the two-goal lead re-established, Wakefield set out to defend, as it attempted to hold on for a winning result.

Unfortunately, the Wakefield offense which had been unrelenting in the first two periods, packed it in during the third in an attempt to fend off the Guardian’s attack.

“We came out to start the third a little flat,” said coach Pellerin’s assistant Gianatassio following the 3-3 draw.

Whether it was an adjustment in tactical philosophy or a case of the Warriors just running out of steam, St. Peter-Marian stayed on the attack, and with 9:22 to play, Yandell’s goal was breached for a second time to make it a 3-2 game.

Yandell made the initial save on the attempt on his goal but the rebound came to Conor Leonard and he got a little bit lucky as his put back effort ricocheted off a Wakefield skate and into the net.

Wakefield now held a fragile one goal lead with plenty of time still to play.

“We let in a fluke goal off our own player’s skate and we let the game get away from us,” Gianatassio said. “We just let it slip away.”

Another five minutes would go by, with St. Peter-Marian doing the majority of the attacking.

Wakefield was putting up resistance to the Guardian’s comeback effort and fend them off by keeping the puck down their offensive end as much as it could.

All the possession didn’t materialize into more goals and Wakefield found itself vulnerable to a counterattack play, which is exactly what did the Warriors in with 4:28 remaining in the game.

A turnover near center ice put the Guardians on a 3-on-1 rush toward Yandell’s goal. Some fine play between Guardians’ Cole Archambeault and Jack Quinn had Yandell caught out of net and led the feed to Nick Pennucci who fired a shot into a wide open net to make the score 3-3.

Each team had opportunities down the stretch to win the game but neither goalie would be beaten again on the night.

Wakefield had another player sent into the penalty box with just under four minutes to play but was able to kill off the man-advantage.

“We got some penalties and kind of lost our rhythm,” said Gianatassio. “The penalty situation got the best of us. We couldn’t come back from being a man down. We let that affect us and get in our head, we need to get over the hump and learn how to win the game.”

Wakefield then went on the power play with 2:18 to play but was unable to notch the game-winner.

It had to be a massively disappointing result for a Warriors team still seeking their first victory this season as they held the lead for a majority of the game against an opponent that was not up to par with the usual level of competition the Warriors face in the Middlesex League.

One positive the Warriors must take from the effort on Wednesday is the number of scoring attempts they created. Up to this point in the season, getting shots has been hard to come by, let alone scoring goals. Last night the Warriors were creating the opportunities they needed but unfortunately they were unable to finish the job enough.

Assistant Coach Gianatassio made sure to mention a couple of Warrior accomplishments, “We had a couple first goals tonight. Joe Stackhouse and Steve Marino had their first high school goals.”

There is no respite waiting for the Warriors as they resume Middlesex League play on Saturday when they take on perennial hockey power Winchester at Kasabuski Arena. The puck drops at 6 p.m.

“Historically they’re a great team in the Middlesex League,” Gianatassio said. “Just like any Middlesex League game we’re going to give it our best and hope for three full periods.”