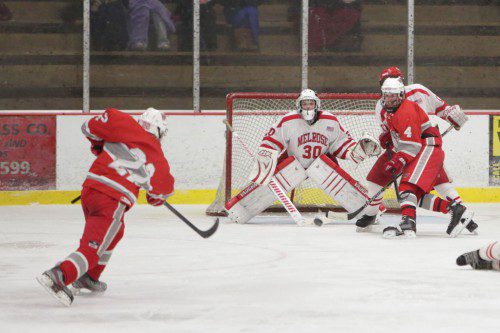 DOM BRUNO, a senior defenseman (#22), fired a shot on Melrose goalie Tyler Brown (#30) as senior forward Joe Stackhouse (#4) gains position in front of the net. The Warriors played a good game but fell short against the Red Raiders by a 3-2 score last night at the Kasabuski Arena. (Donna Larsson Photo)

SAUGUS — Even though the Warrior boys’ hockey team has only one win on the season, teams can’t take Wakefield lightly.

The Warriors proved to be a handful and more against tournament bound Melrose last night at the Kasabuski Arena as they scored first and last in a well-played 3-2 loss against their Middlesex League Freedom division rival.

Wakefield scored the only goal of the first period and led 1-0 at the intermission. Melrose responded with a pair of tallies in the second period and the game-winning goal early in the third period. The Warriors scored an empty net goal in the final minute but they were unable to get the equalizer.

“We played a good first period but we got a little lax in the second period,” said Coach John Pellerin. “Tyler Pugsley came in cold to start the third period and gave up that quick goal. That was a tough situation for him. But we didn’t give up and scored with 44 seconds left. We tried to get the puck up the ice to get the goalie off the ice again but we were unable to do so.

“Overall, you can see the improvement,” added Pellerin. “Melrose is going to the tournament and they’ve had some big wins. We skated with them.”

Pugsley, a freshman, came into the game to start the third after junior goalie Ben Yandell separated his left shoulder at the end of the second period and couldn’t continue. Yandell made 18 saves while Pugsley made four saves.

The Warriors started off the game strong and tallied the first goal at 2:26 of the first period. There was a host of Wakefield players in front of Melrose goalie Tyler Brown, a junior. Senior forward Andrew Patti knocked the puck in with senior forwards Zach Salamone and Bryan Noyes earning the assists.

Melrose senior defenseman Jake Karelas had a good bid with a shot from the point later in the frame. Yandell made the original save then denied the Red Raiders on the rebound.

Melrose picked up its level of play in the second period and outshot the Warriors, 12-5. The Red Raiders also scored two goals to take a 2-1 lead.

Melrose, which was designated as the home team and wore white as both Wakefield and the Red Raiders call Kasabuski home, scored the tying goal at 4:56. Senior forward Ryan Feeney collected a puck in front and backhanded a shot into the left corner. Freshman forward Shea Champagne and junior forward Stephen Guttadauro assisted on the goal.

Shortly after, sophomore forward David Melanson fired a shot on Brown in a bid to put the Warriors back in front.

After a penalty on Warrior senior defenseman Dom Bruno, who was sent to the penalty box for tripping at 10:01, Wakefield had a couple of shorthanded bids. Also, Wakefield was penalized only twice while the Red Raiders had one player sent to the penalty box. Both teams did a good job of playing disciplined hockey which made for a better game for the fans in attendance to watch.

Melrose scored the go ahead goal at 13:41 of the second period. Senior forward Brian McLaughlin sent a shot into the right corner for a 2-1 lead for the Red Raiders after two periods. Freshman forward Matt Campagna and Karelas earned the assists.

The Red Raiders upped their lead to 3-1 just 47 seconds into the third period. Melrose won the battle on the boards and senior forward Jack Hickey fired a puck into the net. McLaughlin assisted on the goal.

“Melrose  became more physical in the second period and we needed to match that physicality,” said Pellerin. “They won that puck along the boards in our zone. We forced Melrose to shake up their lines. The first line of (numbers) 17, 24 and 4 wasn’t doing anything and he (Melrose Head Coach Vin Mirasolo) was using different combinations. Our silver line of Andrew Patti, Bryan Noyes and Zach Salamone did a good job of neutralizing them.”

In the final two minutes, Wakefield pulled Pugsley in favor of the extra skater hoping to rally late. The Warriors got a goal back at 14:16 of the third. Melanson scored the goal in front with junior defenseman Logan Dunn and senior Anthony Funicella earning the assists.

That cut the lead to 3-2 with the face-off at center ice. The Warriors tried desperately to get Pugsley off the ice in favor of the extra skater once again. But the Red Raiders denied Wakefield that chance as the game ended with Melrose skating off with the one goal victory.

“The effort continues to be there,” said Pellerin. “Even though we’ve won one game, teams can’t take us lightly.”

Wakefield has a makeup against Belmont scheduled for tomorrow afternoon at 4 p.m. at the Viglirolo Rink before hosting Burlington on Saturday night at 6 p.m. at the Kasabuski Arena.