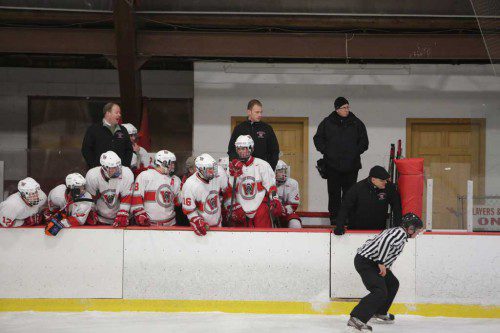 WAKEFIELD — There was no state tournament berth this winter for the Warrior boys’ hockey team. However despite the final record, Wakefield did show a lot of improvement from the 2013-14 season.

The Warriors posted a 2-14-4 overall record (2-12-2 in the Middlesex League Freedom division) under first year head coach John Pellerin and were a competitive group of players in a tough league that had Burlington and Woburn face each other in a play in for the Super Eight Tournament and a Div. 3 state champion with Watertown taking home the title.

Also, Arlington, Winchester, Melrose, and Stoneham all played in the state tournament.

“You have to judge the way we improved from the beginning of the year to the end of the year,” said Pellerin. “We were competitive, but I think we were became more competitive as the year went on. We made progress. With a new coaching staff, we put in new systems and it took a little longer for the players to comprehend the new system.”

The Warriors graduate nine seniors and have 12 underclass players back next year which is a good nucleus to work with for 2015-16.

“We have two of our captains, Dylan (Melanson) and Anthony (Funicella) and both were integral parts of the team,” said Pellerin.

Funicella, a forward, scored five goals and had a number of assists, while Melanson, a defenseman, tallied four goals and had several assists as well.

David Melanson scored two goals and had at least six assists as he helped give the offense a spark later in the season, too.

Also JV players John Adragna, Brad Langlois, and Ryan Chambers were called up for the Woburn game and Adragna scored a goal.

“Many of the sophomores improved and showed their value,” said Pellerin. “The off-ice conditioning they do during the offseason will help us improve next year. Our two goaltenders will be back next year and both did a good job of handling the duties this year and both will do well in the future. We will have a number of players competing for spots next year and there will be JV players moving to the varsity level that will have the opportunity to earn a spot. We also have some incoming freshmen from the successful middle school program that could be a part of things, too.

“Our goal (the coaching staff) was to come in and stabilize the program and make improvements from the youth to middle school to the high school program,” added Pellerin. “We want to improve as a unit and have success from year to year.”

One aspect of high school hockey that Wakefield deals with along with nearly every public school is the departure of athletes to the private schools. A stable and strong Warrior program could just keep a few talented players in Wakefield.

“We want the players to be in a good place (at a public school),” said Pellerin. “Ultimately, parents are going to do what they want for their children and what they think is best.”

The one disappointment for the Warriors is that they didn’t achieve one of their goals and that was to make the state tournament.

“We became a competitive force and several coaches told me that we weren’t far away,” said Pellerin. “We had more wins that we did last year. It took us a while to get that first win and get the monkey of our backs. There were several games where we lost by a goal or two or tied and got just one point. We want to get those games to turn in a positive direction for us. We need to play a full 45 minute game.

“The kids gave everything they had,” continued Pellerin. “We were competitive against good teams that were in the state playoffs. The kids worked real hard.”

Pellerin believes that if the Warriors put in the offseason conditioning and continue to work hard, they will improve. Also when next winter comes around, the extra year of experience will help make Wakefield a better squad.

“An extra year of experience should help, but the kids also need to do the things during the offseason that will help make us better,” said Pellerin. “How much we improve depends on the execution of the offseason plan. All the necessary things to be successful and improve our performances. The future is bright. The players are maturing under the new system and that will help the program succeed.”

While the underclassmen gained some valuable experience and will help the program going forward, there are nine seniors who wrapped up their careers at WMHS.

“We’ll miss the seniors. They helped this club,” said Pellerin. “I wish I coached them more than one year in the new system.”

While the 2014-15 season didn’t yield more victories, the foundation has been laid for what Wakefield hopes will be better days ahead.