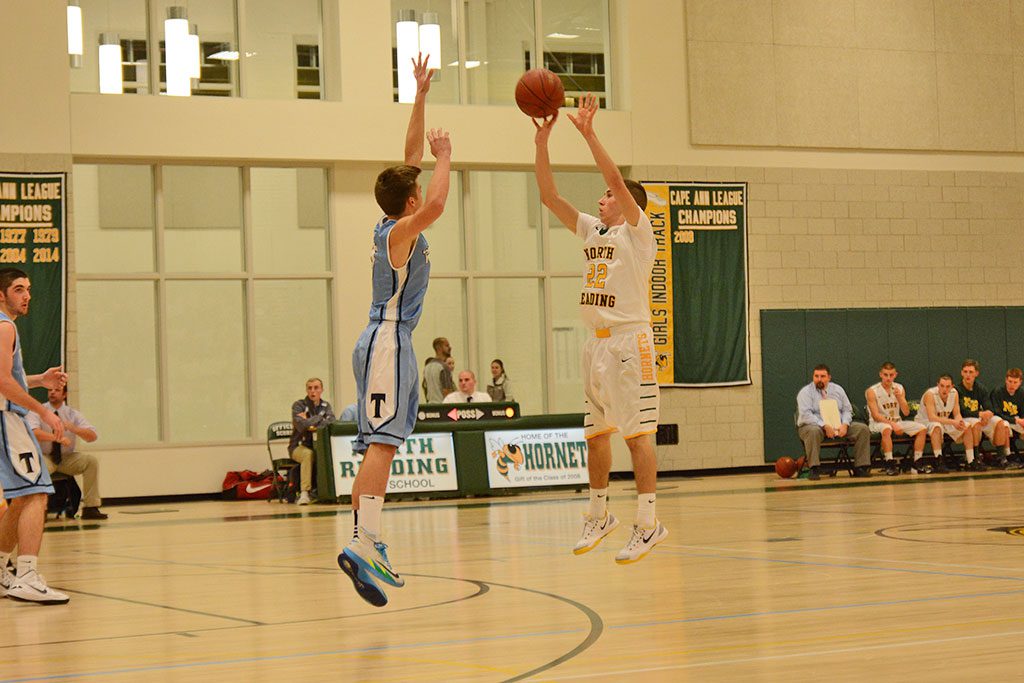 LONG RANGE. Senior Shane Bartlett takes a shot against Triton opponent in the first home game win for the Hornets this season. The  Hornets defeated Triton 62 to 40.   (Deanna Castro Photo)

In the first quarter of the road game, the Hornets got off to a quick start and jumped out to an early 7-1 lead. Hoops by Hogan, Goldstein plus a three by sophomore point guard Anthony Eldridge sparked the offense. Unfortunately the quick pace was halted by foul trouble and the lead was just 16-12 at the end of the first.

The lead was extended to as much as eight in the second quarter but thanks to more foul trouble they couldn’t shake the Clippers. North Reading took a 30-24 lead at the half.

The Hornets fell apart to start the second half. Newburyport outscored them 12-5 to start the third quarter and took its first lead of the game midway through the period, 36-35. But after a quick timeout the Hornets closed the quarter on an 11-1 run. Behind threes from Goldstein and senior guard Shane Bartlett, North Reading took a 46-37 lead at the end of the third quarter. 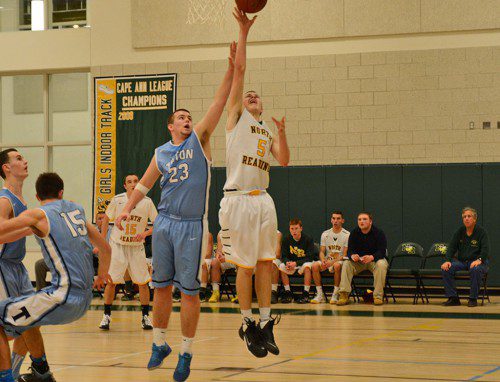 Foul trouble plagued the Hornets in the fourth and the Clippers chipped away at the lead. Newburyport went to the line 10 times in the quarter, slowing the game down. Thankfully Hogan kept the Hornets’ lead at a manageable six points for most of the quarter with three big hoops in the period.

With just over 10 seconds left and the lead at three, a Clippers’ shot was partially blocked by Hogan. The ball rolled around the perimeter and went to a wide open Newburyport player who calmly nailed a three at the buzzer to send the game into overtime.

North Reading fell behind by four points early in the extra frame but crawled back into game thanks to a huge three-pointer from Goldstein and clutch foul shots from Hogan.

But with the game tied with 10 seconds left the Hornets fouled a Newburyport player driving to the bucket. He missed the first foul shot and drained the second. Unfortunately, a last-second shot by North Reading rimmed out and the Hornets fell 66-65.

The Hornets hosted Triton on Friday, Dec. 19 in their home opener and Hamilton-Wenham on Monday, Dec. 22, both after press time. On Saturday, Dec. 27 and Sunday, Dec. 28, the Hornets will host the annual Kipnes Holiday Tournament. They will face Greater Lawrence at 7 p.m. in the opening round on Saturday.