Boys hoop team banking on a blend of experience and youth 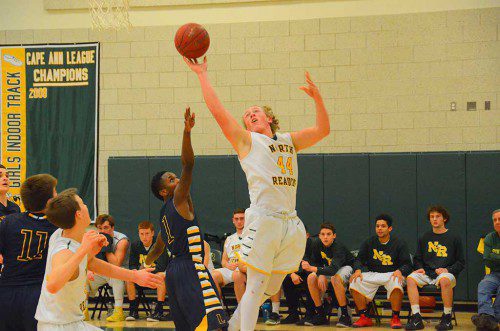 THE HORNETS will depend on senior Bob O’Donnell to provide an aggressive on court presence this coming season. (Transcript File Photo) 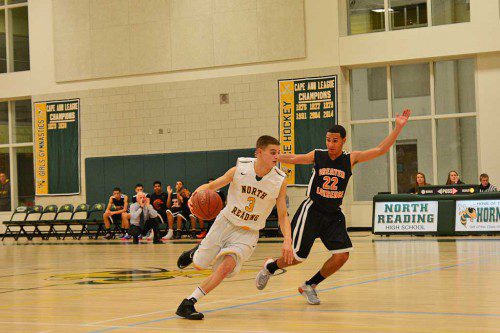 ANTHONY ELDRIDGE is one of the key seniors returning to lead the 2016–2017 varsity basketball Hornets. (Transcript File Photo)

NORTH READING — Even after losing eight players to graduation from a team that won the Cape Ann League last season, the 2016–17 varsity basketball Hornets return a group of experienced talent and should be in the conversation for the CAL title again.

North Reading returns four key senior players in Anthony Eldridge, Matt McCauley, Bobby O’Donnell and Matt McCarthy, who will be the backbone of the team. Unfortunately at the moment Eldridge and McCarthy have yet to practice due to injury.

Eldridge will serve as a captain and is a returning CAL All-Star at point guard. Senior guard Matt McCauley is clearly the team’s best player, whom Head Coach Joe Casey calls our “go to guy” and has a shot at CAL Player of the Year. Along with Eldridge they have the potential to be the best backcourt in the CAL. O’Donnell and McCarthy will be aggressive presences at both ends of the floor and be counted on for scoring.

There are also three returners that paid their dues on the bench last season that will be key contributors. Senior forward Anthony Maldonado is a natural scorer who will help offensively. Another senior forward Jackson Tormey is scrappy and will provide depth. Senior forward Shawn Tilton, who Casey says is the most improved player in the program, is a lanky 6’3 who shoots the ball very well. Senior Cam Davis, who did not play last year has impressed in the preseason. He is an athletic and smart kid who will come off the bench at point guard.

There are seven incoming underclassmen, five juniors and two sophomores, that round out the roster. Junior forward Colin Boucher is an aggressive player with solid inside offensive skills. Another junior, Tim Peach is a lanky 6’5 forward who is an excellent passer and shot blocker. The three remaining juniors Lionel Beane, Jared Gonzalez and Burke Reisenberg will provide depth. Casey is also very excited to have sophomores Matt Solecki and Ryan Connor around for the next three years.

With a good amount of talent Casey is looking forward to the season. “This is my 16th year at NRHS. We have a great group of kids that are fun to be around, work hard and are very coachable. We certainly have a chance to be successful and compete for the CAL title again.”