Boys’ hoop team has a senior moment in rout of Burlington 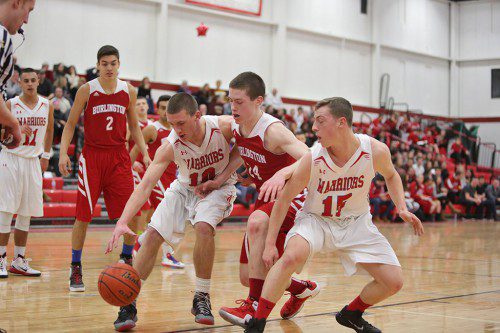 JUNIOR FORWARD Tighe Beck (#10) fights for the ball as senior MJ Urbano (#15) and a Burlington player fight for the ball as well. Beck scored five points and had 12 rebounds and Urbano tallied eight points with three steals and two assists. The Warriors routed the Red Devils, 78-46, to clinch a state tournament berth. (Donna Larsson Photo)

After missing out on a win last Thursday night before against Belmont with a 61-51 loss at the Wenner Field House, a win over the Red Devils would secure a spot in the state tournament for the Warriors.

Wakefield earned a berth in the state tournament with a lopsided 78-46 triumph.

Friday was Senior Night and Wakefield honored the senior members of the team, along with three-year team manager Brandon Naggar.

Head coach Brad Simpson sent out all four active seniors in the starting five as Neil Fitzgerald and MJ Urbano joined the usual starters Chris Calnan, Brian Dickey and junior Tighe Beck. Lou Spaziani has been out for the entire season with an injury.

“Those four seniors and Tighe Beck came out smoking,” said Coach Simpson, as he watched his Warriors jump out to a 21-8 first quarter lead. “They established the fast pace of the game. They played exceptionally well as a unit.”

Of the 78 points Wakefield scored, 43 of them came from the four seniors.

Chris Calnan put up huge numbers once again scoring 24 points while shooting 3-for-4 from three-point range, 10 rebounds, three steals and three assists to go along with just one turnover.

“Neil Fitzgerald was a real spark plug,” Simpson said of his senior guard who had three steals, two assists, zero turnovers to go along with two first quarter baskets for his four points as he got the start in his final league home game.

Fellow senior MJ Urbano had eight points in the starting front court for Wakefield to go along with three steals, two assists and zero turnovers.

The veteran leadership led to just 12 turnovers, six in each half and set the table for what in the end would be an easy win for the Warriors.

“When we’re under 15 turnovers usually it’s a close game,” said Simpson. “That underscores the impact the seniors had.”

Junior Tighe Beck, the fifth starter, had a huge game on the glass with 12 rebounds, five of which came on the offense end leading to his five points.

Junior Jon Miller is normally a starter but against Burlington Friday he came off the bench, yet was no less effective than he normally is scoring 14 points while going 2-for-4 from beyond the arc and adding three rebounds and two assists.

“He’s kind of a quiet assassin,” said Simpson of Miller. “If you don’t pay attention to him you’re going to pay for it.”

The second quarter saw a little more scoring but as both teams traded baskets scoring 16 points each, the 13 point lead remained intact at halftime.

In the second half it was all Warriors, as they outscored Burlington 24-11 in the third quarter and 17-11 in the fourth.

“The same unit that started the game, came out to begin the third quarter and just blew them away,” the coach said.

The highlight of the night and perhaps the season, came with the Warriors well out in front in the fourth quarter.

With the win in hand, Coach Simpson called the number of senior team member Dan Rej.

The crowd went wild for Rej as he was introduced but the ovation was doubled when seconds after stepping on the court, Rej got the inbound pass and drained a jumper from 18 feet.

With the crowd still buzzing after a miss by Burlington, Rej got the outlet pass and dribbled to the three-point line where he fired up a trey and nailed it, giving the Warriors a 78-44 lead at the time.

Burlington got the last bucket but it was an insignificant two points as the Warriors closed the Middlesex League home schedule with a win.

The Warriors (9-8 overall, 9-6 in the Middlesex League Freedom division) will be back in action on Monday at 4 p.m. as they host Everett High in an exclusionary game, then they wrap up the regular season with a chance to claim the M.L. Freedom division title with a victory versus Melrose in a makeup game on Wednesday night.