Boys’ hoop team settles for a piece of the M.L. Freedom division title

Edged by Melrose, finishes in a three-way tie for league championship 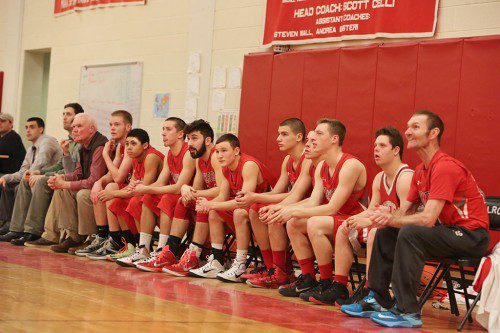 THE WARRIOR bench can only look on as Melrose prevailed in the regular season finale last night at the Melrose Veterans Memorial Middle School Gymnasium. As a result, Wakefield, Melrose and Watertown finished in a three-way tie for the Middlesex League Freedom division title. (Donna Larsson Photo)

MELROSE — A share of the Middlesex League Freedom division championship is better than no title at all.

That’s the way the Wakefield Memorial High boys’ basketball team has to look at it after squandering a chance to win the M.L. Freedom division title outright. The Warriors dropped a closely contested 52-47 contest to rival Melrose last night at the Melrose Veterans’ Memorial Middle School Gymnasium in the regular season finale.

Wakefield, Melrose and Watertown all finished the M.L. Freedom division schedule with identical 9-7 records as the three are league tri-champions. Melrose (10-9 overall) also clinched a state tournament berth with the win.

Meanwhile, Wakefield’s overall record was 9-9 and the Warriors will also get ready for the postseason as the state tournament pairings are being done on Saturday.

Wakefield was just 6-for-21 from the free throw line and that was a big difference in the outcome of the game.

The Warriors overcame a slow start and opened up a 9-6 lead after one quarter. At halftime, Wakefield led by two points, 21-19. However Melrose came out firing on all cylinders in the third period and outscored the Warriors 25-11 to open up 44-32 advantage after three. While the Warriors came back and made things close in the final eight minutes, they never got closer than four points. 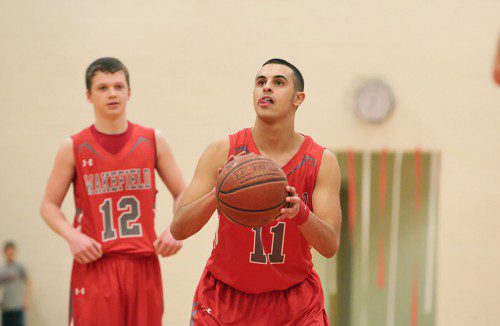 “I’m very proud of the effort and the way we controlled the first half,” said Simpson. “In the second half, we fell behind but got back in it. The third quarter was also too much (Anthony) Gilardi. Colby Andrews scored 25 points the first time we played them and I thought we did a good job against him. He got a few key baskets but overall I thought we did a good job defending him.”

Melrose got off to a quick start as it jumped out to a 6-0 lead. Senior guard Christian Pizzotti netted two free throws and senior forward Julian Nyland (10 points) hit a pull-up jumper and put back a missed shot.

After a time out, the Warriors came back with the next nine points. Calnan hit a shot and Beck put in a rebound of a missed shot. Calnan sank a trifecta and junior forward Andrew Auld (six points) recorded a field goal inside despite being fouled. He missed the subsequent free throw.

The Warriors scored the first seven points of the second quarter to open up their biggest lead of the game, 16-6, with 6:10 remaining in the half.

Sophomore Alex McKenna hit a shot from inside the paint on a rebound of a missed shot, senior guard Brian Dickey (six points) recored a layup on a nice pass from Jon Miller and then Miller, a junior forward, canned a trey to put the Warriors up by 10 points.

But Melrose answered with a 9-0 run to cut the lead down to one point, 16-15. Gilardi hit two free throws, Andrews banked a shot off the glass and Nyland recorded a layup and sank a trey.

Miller ended the run by getting one of two foul shots to fall. Gilardi made both of his free throws down the other end to tie the game at 17-17.

Senior MJ Urbano gave the Warriors a nice spark off the bench. The senior hit a three-pointer to put Wakefield back in front. Urbano then got to the free throw line on three occasions and had five attempts. However he made made just one foul shot. Wakefield made two out of eight free throws in the first half as a team.

Andrews went to the charity stripe with 31.7 seconds left in the first half and made both as Wakefield led by two points (21-19) at the break.

Senior forward Will Caffey canned a trey to begin the third quarter to give Melrose the lead for the first time since early in the first quarter, 22-21. But Dickey broke down the court and scored a fast break basket to give the Warriors a 23-22 lead.

Gilardi hit a pair of baskets before Calnan recorded a layup with five minutes left to cut the lead to 26-25. But the Red Raiders outscored Wakefield, 11-0, over the next several minutes to open up a 37-25 lead. During the run, Melrose forced several missed shots and turnovers while it converted on the offensive end itself.

Gilardi hit a two point field goal and then a trey. Andrews hit a pair of baskets and Gilardi scored from inside the paint.

The run ended as junior guard Corey Imbriano sank three-point shot with 1:49 left in the third. Wakefield then forced a turnover and Calnan was fouled while driving to the basket. On the play, Caffey was hit with a technical foul as the Warriors were awarded four free throws and possession of the ball. Calnan missed both of his free throws and Dickey made one of two on the technical foul free throws.

The Warriors also didn’t score on the ensuing possession and Gilardi made two foul shots down the other end.

Calnan made a three-point shot with 48 seconds left but Pizzotti answered with a trey and Gilardi sank a layup right before the buzzer as the Red Raiders led by 12 points, 44-32, after three quarters.

Wakefield was forced to play catch up in the fourth quarter. After a pair of missed free throws, Calnan hit another trey and hit two foul shots to cut the lead down to seven, 44-37, with 6:39 left.

Gilardi made one of two free throws but Andrews rebounded the miss on the second foul shot and got a hook shot to fall as the lead got back up to 10 points, 47-37, with 5:41 left.

Junior forward Tighe Beck was fouled and missed both foul shots. However, Auld got the rebound and the basket.

After an Andrews field goal and a missed free throw by each team, Beck scored and Auld made a layup on a pass from Calnan to cut the Red Raider lead down to 49-43.

Calnan then got a trifecta to fall with 1:31 left. After Gilardi missed two free throws with 58.7 seconds left, Melrose turned the ball over. After a Wakefield turnover and a Melrose timeout, the Warriors came up with the ball and Dickey made one of two from the charity stripe to cut the lead to 51-47 with 23.4 seconds remaining.

Wakefield fouled Nyland immediately and he missed the front end of a one-and-one. The Warriors got the ball up the court but Miller and Calnan both missed three-point attempts. Nyland then made one of two free throws down the other end with 8.8 seconds which pretty much sealed the victory for Melrose.

“The name of the game is to put the ball in the basket and we didn’t do that very well tonight,” said Simpson.

As a result, the Warriors were forced to settle for a share of the league title and will now prepare for the first round of the state tournament which most likely will begin the middle of next week.