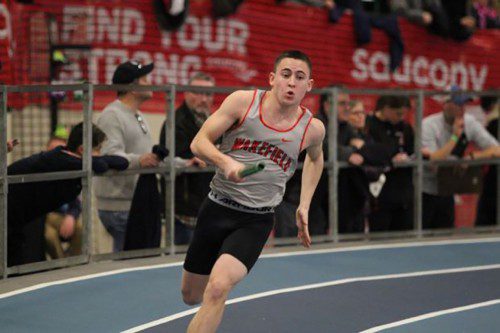 DAN SALLADE, a senior, ran one of the four legs of the 4×200 relay in the MSTCA State Coaches Invitational Small Schools Meet on Sunday. The Warriors 4×200 relay captured first overall at 1:34.56. The other three runners included Dan Summers, TJ Sellers, and Brian Smith.

The 4×800 relay was one of four teams entered and the Warrior quartet won easily with a time of 8:22.19 to Winchester’s second place time of 8:39.02. The four runners included junior Matt Greatorex, senior Nick McGee, senior Ryan Sullivan, and senior Adam Roberto.

The Warriors also had two athletes medal in the shot put. Cole Mottl, a senior, placed third with a distance of 48-0 3/4 and Pat Redmond, a junior, took sixth with a throw of 46-4 1/4.

Greatorex ran in the unseeded heat of the 1000 meter run and captured third overall as he clocked in at 2:37.47. There were 35 entries.

Wakefield had a total of 18 entries in the meet, 16 of which were individual entries. The rest of the Warrior competitors didn’t medal.

Sallade finished 10th overall in the 55 meter dash with a time of 6.88 seconds, while Henry Stikeman, a junior, placed 69th at 7.29 seconds. There were 83 runners in the race. Sallade and Stikeman ran in the preliminaries, but neither made the final.

“This was a good tune up before states so we can see where we are before that meet. Now we prepare for the league meet next Monday.”

The Middlesex League Championship Meet is scheduled for Monday, Feb. 6 at 4:30 p.m. at the Lewis Track Center.