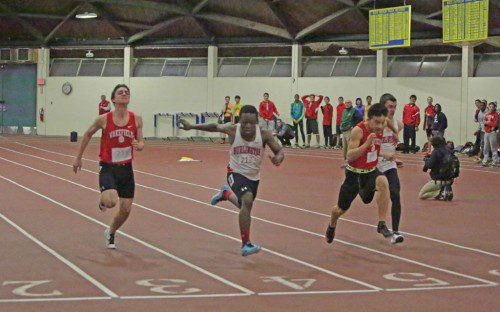 IN A DISPUTED outcome, Warrior Eric Chi (second from right) reached the tape at nearly the same time as Burlington’s Chenet Guerrier (second from left). If the Warriors are declared victors they will be league indoor track champs outright for the first time since the early 1970s. For full story and more photos, see Sports beginning on Page 11. (Donna Larsson Photo)

LEXINGTON — There is an old saying that good things come to those who wait. For the Wakefield Memorial High boys’ indoor track team it is still waiting to see if it it won the Middlesex League Freedom division outright or if it had to share the title with Burlington even though the two teams ran in a battle of undefeated teams last night at the Lexington Field House.

The event in question is the 45 yard dash where a photo finish was used to try and determine the winner. Originally, Burlington was awarded the first place before the 4×400 relay. Then the relay was run and Wakefield won that event.

Several minutes after the 4×400 relay, the final event, was finished Wakefield believed it had won the Middlesex League Freedom division title outright after the photo of the dash finish was reviewed. The team let out a huge celebrated when it received the word.

But Head Coach Ruben Reinoso was informed this morning that Burlington was protesting the result of the dash and the entire meet was reviewed this morning.

The event in the 45 yard dash as junior Eric Chi and Burlington’s Chenet Guerrier were involved in an extremely close race. When the teams left Lexington last night it was believed that Chi had won the event by two hundredths of a second, 5.425-5.427, which was thought by Wakefield to have ultimately decided the meet in its favor as it edged Burlington, 44-42.

While first and second is under review, third place was being looked at as well. Burlington’s James Hoffman was awarded  third place with a time of 5.51 seconds but Wakefield is contending that he was disqualified which would give third place to junior Kevin Russo.

If the score holds up, Wakefield finished the dual meet season with a perfect 5-0 record and captured its first M.L. championship in boys’ indoor track since at least the early 1970s. Burlington, meanwhile, finished with a 4-1 record and came up short in its quest to repeat as M.L. Freedom division champions.

The meet was an exciting one from start to finish and Burlington led, 38-34, after the 45 yard hurdles was completed.

Then the dash was run and the race was close between Chi and Guerrier. 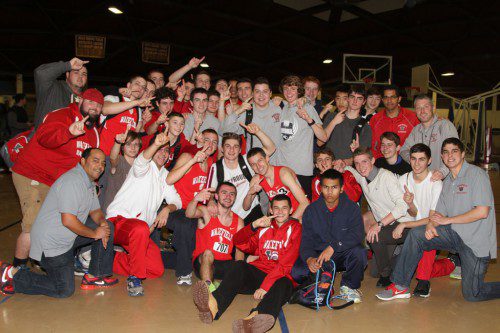 THE MEMBERS of the WMHS boys’ indoor track team celebrated after learning it had captured the Middlesex League Freedom division championship outright. The final result was in question, however, after Burlington lodged a protest of the results of the 45 yard dash this morning. The matter was still being reviewed at press time.
(Donna Larsson Photo)

But at the time Burlington was awarded the win and the scoreboard display at the Lexington Field House showed that the Red Devils ahead 43-38 while the photo was reviewed. That meant the relay was run with Wakefield believing it needed the five points just to come away with a tie.

“The kids made it exciting,” said Reinoso. “It was like boxing match. Who hit last was going to win. Mentally these kids are tough and they have a lot of heart. We knew our relay team was a lot better and they came up with a huge win.”

The meet started off with the mile as junior Alec Rodgers nosed out Burlington junior Tommy Taranto in a close race, 4:55.11-4:55.37. Taking third was junior Dan Margalit who timed in at 5:03.46.

In the 1000 meter run, Ritchie was bumped out of the inside lane twice and finished second with a time of 2:40.35. Burlington freshman Colin Raposo won the event in a time of 2:38.10. Wakefield got a key third place as junior Alex Guerriero earned a point as he posted a time of 2:57.92.

The results of the shot put came in shortly after that and Wakefield came away with a second place finish. Senior Ben Joly had a second place throw of 47-4 1/2. Burlington junior Matt Jankowski won the event with a distance of 51-1 /2 and Red Devil senior Patrick Hoarty finished third with a heave of 45-11.

The 600 meet run was a thrilling race as Gallagher showed why he is one of the best in Div. 4 as he captured first place in the event in a time of 1:28.27. Burlington senior Eric Salina was second in a time of 1:30.54. Taking third for the Warriors was senior Tyler Strauss as he ran a time of 1:33.00.

Burlington sophomore Chris Pappas won the 300 meter dash in a time of 38.04 seconds. But Hurton and Yasi came up with a clutch second and third place in the event as they timed in at 38.86 seconds and 39.45 seconds.

The high jump wrapped up soon after that and senior Pat Casaletto came in second as he cleared 5-5. Burlington’s Edmund Reis, a senior, cleared 5-7 to win the event and Vince Williams, a sophomore, finished with at 5-5.

The event which Wakefield came up very big in was the two mile behind the efforts of sophomore Adam Roberto and junior Rich Custodio who captured first and second place. Roberto clocked in at 10:37.50 and Custodio posted a second place time of 10:52.84. Custodio beat out Burlington junior Yash Bhalla (10:58.29) which was a bit of a surprise.

“Rich Custodio ran a great two mile and got a second for us. That was big. We expected a first and third,” said Reinoso.

The 45 yard hurdles was the next event run and the Red Devils finished first and second behind the performances of Reis (6.56 seconds) and junior Leoterio Nakaana (6.90 seconds). Warrior sophomore Ben Thompson prevented a Burlington sweep as he secured third place in a time of 7.14 seconds.

The next event, the dash, is where all the controversy came from. That event was run and then the relay.

“The kids really brought into the program,” said Reinoso. “I believe this team has a shot at states. They’ve wanted Burlington for the past couple of weeks. We’ve closed the gap. It was a big difference from last year when we ran against them. We are going to lose some seniors who came up big for us. But we have outstanding juniors and sophomores coming back. The kids did an outstanding job.

“My assistant coaches — Justin Berry worked with the throwers, Perry Pappas with the distance runners, my brother Elias with the hurdlers, and Chris LaFratta who came over from Peabody — did an outstanding job,” continued Ruben Reinoso. “It was a total team effort.”

There were also some good performances from the non-scoring entries.

The Warriors will get ready for the Middlesex League Individual Championship Meet on Monday at 5:30 p.m. at the Reggie Lewis Track and Athletic Center.