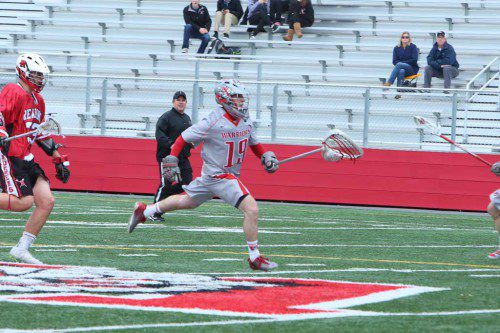 ALEX FLYNN, Wakefield’s goalie, races up the field during a recent game. The Warrior boys’ lacrosse team increased its record to 6-1 on the year with wins over Watertown and Stoneham. (Donna Larsson File Photo)

WAKEFIELD — The Wakefield Memorial High School varsity lacrosse team played in a pair of contests last week on the road against opponents in the Middlesex League Freedom division. The Warriors won both games as they topped Watertown, 10-8, last Wednesday at Victory Field and crushed Stoneham by a 19-1 score on Friday afternoon at Stoneham High School.

Wakefield is now 6-1 overall on the season.

Last Wednesday, the Warriors traveled to Watertown where it squared off with a formidable Red Raiders team that gave first year head coach Andrew Lavalle’s side all they could handle.

Despite stiff resistance from the opponent, Wakefield was able to claim victory after four quarters with a 10-8 final score.

“Watertown really brought out the best in us, it’s always a tough place to play,” Lavalle said of the opponent on Wednesday. “Watertown always plays us tough. They’re a tough team. They play hard. They have guys that make plays.”

Coach Lavalle seemed satisfied with the win saying, “The thing I took away from the Watertown game was it was a good team win.”

According to the coach, the game was a back and forth, even contest. There was very little to separate the two teams in the first half.

The Warriors got a big game performance from junior attack man Brandon Grinnell, who helped the Warriors to victory with four goals and three assists.

Senior MJ Urbano had two goals and two assists and PJ Iannuzzi, Austin Collard, Pat Leary and James McAuliffe each had one goal in the victory.

The game hinged on a defensive play in the third quarter, according to the coach.

“Really what it came down to was the play of the game by #77 Steve Marino,” said Lavalle. “We were either tied or down one at the time. We had just made a stop and Flynn had brought the ball to midfield to clear but we lost it at the last second.”

A midfield turnover with the goalie out of the net put Watertown on the attack and Wakefield on the back foot.

“The Watertown attack man had a shot 10 yards from goal and Marino just stepped in front of it and ate it like a total savage,” said Lavalle. “If it wasn’t for that play we wouldn’t have won that game, no doubt about it. It really turned the game around at that point, Steve put the team on his back with that one play and everyone decided to play a little harder after that,”

Coach Lavalle went on to speak about Marino’s attitude and willingness to put it on the line to get the result, “Victory is reserved for those who are willing to pay its price, Steve is willing to. Stepping in front of a lacrosse shot? You can’t pay a lot of guys to do that. He’s a great team player, he puts it all on the line, he loves to compete and he plays for the boys. He’s a guy that really takes a lot of pride in Wakefield Lacrosse and everything he does.”

Victory in Watertown meant the Warriors’ record had reached 5-1 and next up last Friday was Stoneham. In Stoneham, things went a little bit more smoothly, to the tune of a 19-1 victory.

Wakefield got five more goals and another two assists from Grinnell to provide more than enough scoring for the win.

Center McAuliffe had four goals and two assists from the man responsible for winning face-offs and controlling possession.

Wing attackman  Leary had a three goal game against the Spartans while Vin Ferretti and Urbano each had two goals and an assist.

Robert Keegan had his first goal of the season against Stoneham to go along with an assist.

The man making it all tick on Friday was Collard, who netted just one goal, but assisted on five others.

“Austin has just been a great player for us this year,” Coach Lavalle said of his sophomore. “Number one he is dangerous in transition but he has a great lacrosse IQ as well and he see the field really well so he is a guy who is always making the right play.”

Coach Lavalle gave his assessment as to what makes his team so effective saying, “The big thing is, we have a lot of guys that are really good at a lot of different things. What we do is try to identify what we do well and try to capitalize on those things. A lot of our success comes down to our players doing the job that they’re supposed to do. As a team we identify the guys who do certain things well and we rely on guys to make big plays like that.”

Beating Stoneham means the Warriors record now stands at 6-1 with a pair of vacation week non-league games next on the schedule.

The next game for the Warriors is today, Tuesday at 4 p.m. on Landrigan Field as the team hosts Tewksbury in a playoff rematch from a year ago.

“Tewksbury’s really been rolling teams lately, it’s going to be really good competitions for us,” Lavalle said of his next opponent. “They’re another group of guys that play tough. It’s never a cakewalk against Tewksbury.”

When asked if he anticipates this game having a playoff-like atmosphere Lavalle answered affirmatively saying, “Absolutely. We saw them in the playoffs last year, I would only assume we’ll run into them again.”