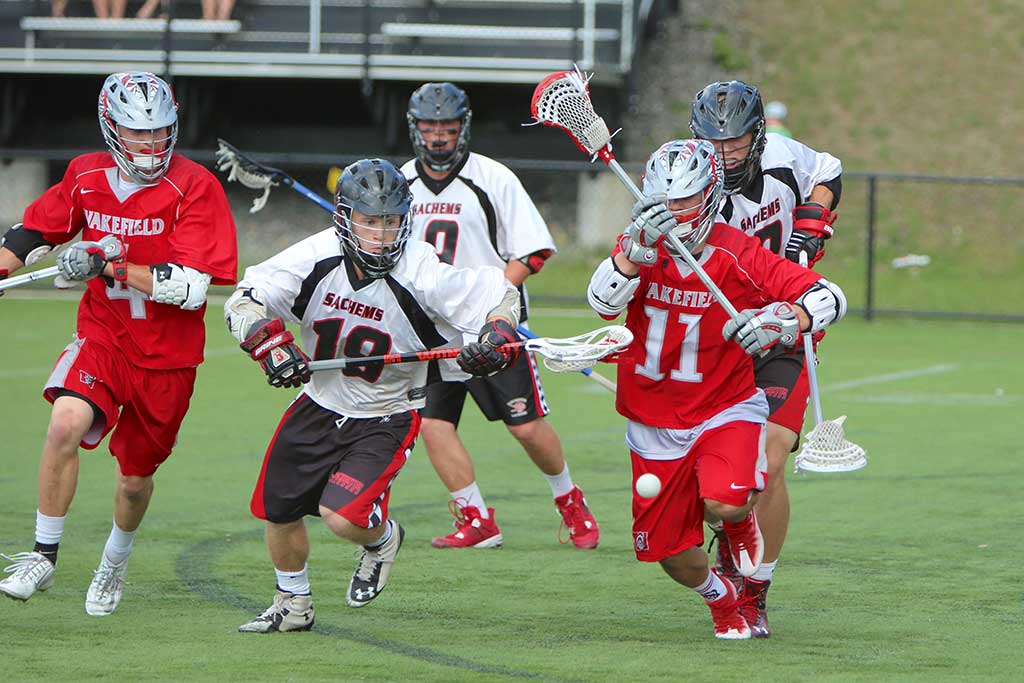 WINCHESTER — It was a game for the ages at Knowlton Stadium on Tuesday evening when the Wakefield Memorial High School varsity boys’ lacrosse team traveled to Winchester for a Division 2 North semifinal contest against  the Sachems.

After trailing by seven goals in the second half, Wakefield went goal crazy in the fourth and mounted a dramatic comeback to send the game into overtime.

After one overtime couldn’t decide a winner, Winchester was able to nab a goal and advance by a 17-16 final score and to face Beverly in the Div. 2 North finals.

“It was just an emotional roller coaster,” Wakefield coach Andrew Lavalle said after the dramatic comeback and nearly a winner from the Warriors late in the first of two overtimes. “Asking somebody to score two in overtime, that’s asking a lot.

A rules technicality that was not enforced in the run of play caused the winning goal to be disallowed after being called and signaled for on the field.

With the players from Wakefield celebrating at one end of the field, a brief meeting of the officials at the other end produced the lead official waving off Ben Yandell’s near game-winner with 1:24 in the first OT.

In lacrosse, when a flag is thrown on the defending team, the team in possession of the ball must advance it to an area of the field known as “the box”. Once a player with the ball enters the box, play continues until the ball comes out of the box, the ball hits the ground or a goal is scored.

The result of the meeting determined that as the flag was thrown by the back official for an offside penalty, Yandell had the ball way ahead on the opposite side of the field and supposedly he stepped beyond the line. The nearest official noticed this but did not know a flag was down at the midfield line and allowed play to continue. Yandell went on to score what appeared to be a game-winning goal just seconds later, sending the Warriors into a victorious frenzy.

After their meeting and waving off of the goal, the officials had the game restart with Wakefield up a man for 30 seconds as a Winchester player served a 30 second penalty.

“There was a transition,” Winchester coach John Pirani explained. “We were riding and one of our players was offside. The flag went down from the trail official. The ball went in the box and came out of the box. The near side official didn’t see the ball come out of the box and let the play continue. What he should have done was wave the play dead. He shouldn’t have let the play continue. The near side official didn’t know the flag was down. This guy didn’t know the flag was down. The other guy didn’t know the ball came out of the box. The two of them had to get together to figure out they were simultaneous events.”

Winchester killed off the penalty and the first overtime finished without anyone claiming the win. Winchester’s Tim Murray scored with 1:38 left in the second OT handing Winchester the win.

“It’s the first time I’ve actually ever seen a goal negated a minute afterward in overtime,” said an understandably upset Lavalle after the game. “I’ve never seen anything like that before in my life. Even if he stepped out of the box, fine. If it’s a play-on situation, it’s not a negate the goal in overtime situation. It’s unfortunate, but what can you do? You can only control what you do, not what the refs do out there.”

Wakefield started the game strong jumping ahead early on with goals from Pat Leary and Austin Collard. The Warriors led 4-2 before Winchester went on to score a string of goals and the first quarter finished with Wakefield trailing 5-4.

Winchester continued its hot shooting in the second quarter as it scored the first five goals to jump ahead 10-5. Braeden Langlois stopped the bleeding for the Warriors and got his team on the board with a nifty goal and then Yandell and Andrew DeLeary put shots in the net. Winchester got the final two goals of the quarter and held a 12-7 halftime lead.

With their backs against the wall, the Warriors dug deep and gritted out an amazing comeback led by four goals from Yandell. At one point the Warriors scored three goals in less than 40 seconds and in all scored seven unanswered goals, tying the game at 15-15.

Winchester nearly won it in the last minute with a goal to put it ahead 16-15 with 44 seconds to play.

Wakefield’s Steve Marino won all but two faceoffs in the fourth and was the catalyst for the comeback. However, with Winchester up a goal with under a minute to play, Marino was unable to secure the next face-off. Wakefield’s defense, led by Marino, hounded the Sachems players until they were able to free the ball up and Ned Buckley scooped it up. He got it ahead to Ty Collins, who had yards of green in front of him and he wisely brought the ball into the attacking part of the field. Collins found Leary who had a clean look at goal but moved the ball to Grinnell at the last second. With seven seconds to play, Grinnell’s shot tied the game at 16-16 and sent it to overtime.

“We had a lot of guys dig real deep and we relied on our seniors,” the coach said as he mentioned the likes of Marino, Buckley, Grinnell and DeLeary.

“Ryan Chambers, our goalie did awesome,” Lavalle said. “That cage is so much bigger in overtime. I can only imagine what he went through for two of them.

“The fourth quarter was huge, it was electric, that’s what we have,” added Lavalle. “We only played like that for the fourth quarter and those overtimes unfortunately. It’s tough when the refs take it away from you, that’s the worst part about this game.”

Wakefield certainly has nothing to hang it heads about, as it provided one of the most exhilarating lacrosse performances in the state and played all season as one of the most dominant lacrosse teams in Massachusetts. The Warriors finish up the year with a 17-3 overall record, the best in the program’s history.