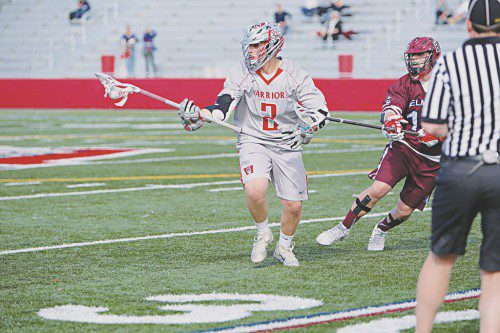 PJ IANNUZZI, a junior midfielder, scored at least a goal in each of the three Warriors this past week. Wakefield defeated Melrose, Marblehead, and Burlington to increase its overall record to 13-2 with three more contests remaining in the regular season. (Donna Larsson File Photo)

WAKEFIELD — Over the past week, the Wakefield Memorial High boys’ lacrosse team has been on quite a roll and is getting closer to possibly repeating as Middlesex League Freedom division champs.

On Tuesday afternoon at Landrigan Field, the Warriors took care of division rival Burlington by a 19-9 score. The Burlington win followed wins over Melrose (14-11) last Thursday nigtht at Fred Green Memorial Field and Marblehead (19-16) on Saturday at Piper Field.

Last Thursday, the Warriors took care of business against their fiercest rival, Melrose (11-5) as they claimed a huge win by a final score of 14-11. The Red Raiders put up a fight but the Warriors kept the ball moving with two players scoring two goals and three players with three goals.

The Warriors had a hard time keeping Melrose from attacking and the numbers bear that out. The Red Raiders scored 11 goals, but the Warriors were helped by 13 Ryan Chambers saves in net. Certainly the outcome would have been different if the sophomore hadn’t stepped up.

The team didn’t have much time to bask in their victory, as it headed back out on the road the two days later, with a trip to Marblehead.

Even though the Magicians have a losing record this season, this game meant something to a lot of players in the red and gray as they were sent packing from the state tournament last season by the Magicians. With so many returning players, the Warriors wanted to make amends for their shortcoming a season ago.

To an extent they got their revenge, topping the host Magicians in a high scoring affair with the final score resting at 19-16 in favor of the Warriors. Brandon Grinnell had a big game on Saturday for the Warriors, as the senior scored seven times and assisted on two of his teammate’s goals, for a nine point effort.

Once again the Warriors had trouble keeping their opponents from scoring but their ability to score goals in heaps kept their heads above water in this one. Fatigue may have played a part in the game on Saturday, having played just two days prior. Marblehead had last played on May 10 in an 18-3 win over Peabody and perhaps was a little more rested.

Picking up two wins to end last week was the ideal scenario for head coach Andrew Lavalle and the Warriors. They knew that on Tuesday afternoon they faced yet another heated rival, Burlington. The Warriors and Red Devils have had some history in recent times duking it out for league titles, but Burlington is down a bit this year and came in with a record of just 7-7 overall.

Wakefield started out well, had a bit of a lull in the middle, then finished with a strong second half to top the Red Devils,19-9. The Warriors led big early, but with a 7-2 lead with nine minutes to go in the second quarter, Burlington started scoring. The Red Devils cut the lead to 7-5 before the Warriors netted a pair to get some breathing room. In the closing stages of the first half, the Warriors got a last second goal to make it 10-6 at halftime.

Coach Lavalle was less than impressed with the lackadaisical way the Warriors played in the middle of the second quarter. He described it as a “lack of urgency,” that allowed the Red Devils to regain their footing and put some pressure on Chambers in the net for the Warriors.

Whatever the coach said at halftime lit a spark under the Warriors, and in particular senior Steve Marino. As a defenseman, it’s a bit unorthodox watching him take face-offs with the long-stick but he’s getting better and better each game and his brilliance at the X was on display in the third and fourth quarters on Tuesday.

Wakefield came out of halftime and, with the possession won by Marino, the home team scored the first four goals of the second half, putting Burlington in a deep 14-6 hole.

Burlington had no chance of coming back from the goal scoring barrage, as it could hardly manage to get the ball away from the Warriors in the second half.

The Warriors got a huge game from another senior this time out. Ben Yandell had a seven goal night to lead the team to victory over Burlington. Over the last three games he has turned up his scoring touch leading the team with 17 goals.

Brandon Grinnell had two goals on Tuesday, bringing his goal scoring tally to 12 over the last three games.

Junior Austin Collard scored five goals on Tuesday to give him a total of 10 over the last three games.