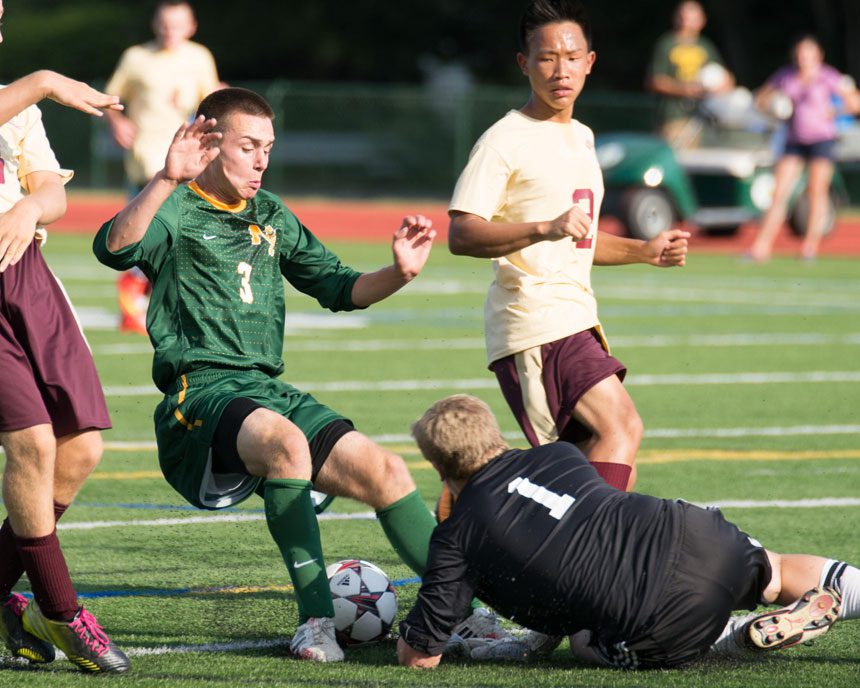 NORTH READING — The Hornets opened their 2014 campaign with a 7-0 home opening rout of the Newburyport Clippers on Thursday afternoon. Senior tri-captain Dan Coveney was the leading goal scorer with two goals. Senior Tom Lewis had a strong game with a goal and two assists.

North Reading jumped on the Clippers early and often in the first half.  In the fifth minute, Coveney opened the scoring when he pounced on a rebound and hit an absolute laser, from just inside the box, into the back of the net.

Just 15 minutes later Coveney struck again. The Hornets broke into the Clippers’ end on an odd man rush and after a nice pass from Lewis, Coveney scored easily.

Senior Jake Intorcio and junior Nicky Govostes continued the onslaught with late first-half goals just two minutes apart. Intorcio’s goal came in the 32nd minute while Govostes scored in the 34th minute. The Hornets took a commanding 4-0 lead into the half.

Dominance continues in 2nd half

The scoring barrage continued early on in the second half. Just two minutes into the second Lewis scored and it was 5-0. Six minutes later, in the 48th minute, senior tri-captain Greg Landry ripped a shot from just outside the box into the upper right corner of the net to make it 6-0.

The Hornets traveled to Triton Monday (after press time) and head to Hamilton-Wenham on Friday for a 3:45 p.m. start before returning home to Arthur J. Kenney Field next Tuesday, Sept 16 to host the Masconomet Chieftains at 4:30 p.m.