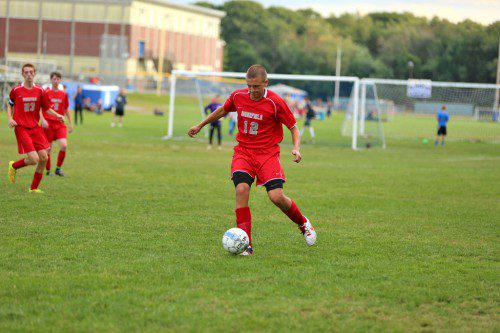 JOE HURTON, a senior, gets ready to send the ball forward during Wakefield’s win against Stoneham. The Warriors had another fine effort against Wilmington yesterday afternoon at Walton Field, but lost a 1-0 game. (Donna Larsson File Photo)

Whether the Wilmington forward meant to take a shot of whether a cross pass was aided by the wind, Kevin Goncalves did his best David Beckham imitation and that goal wound up being the difference as the Wakefield Memorial High boys’ soccer team was edged by the Wildcats, 1-0, yesterday afternoon at Walton Field.

Goncalves’ goal came at 11:00 of the second half and broke a 0-0 tie. From the right side of the box, Goncalves collected a loose ball and sent it across in front of the net. The ball curved and went into the upper left corner of the net for the goal.

The score ruined an otherwise perfect day for the Warrior defense and senior goalie Tyler Strauss.

“We had overall possession. We kept the ball in their half of the field for most of the game,” said Coach Matt Angelo. “We couldn’t get a foot on the ball in the box. We had the potential to finish.”

Angelo couldn’t say enough about the defensive effort of the Warriors.

“I thought our defense was outstanding. Our center backs, Andrew Auld and Joe Stackhouse, had huge games. They limited Wilmington’s opportunities and kept their shots mostly from the perimeter. Tyler Strauss played a great game in goal and came up with some big saves.”

Strauss made two big saves, both of which came in the second half. One was from point blank range by midfielder Brian Cavannaugh that the senior captain smothered. The other came from forward Justin Leger as Strauss had to make a diving save to prevent the ball from going in the net.

Up front, Wakefield possessed the ball and had its share of opportunities. However, the Warriors were unable to put the ball by Wilmington keeper Ryan Horgan. Horgan made 14 saves in the contest.

Senior captains Neil Fitzgerald and Ian Ritchie turned in fine efforts along with junior Mo Janga and the rest of the Warrior players in uniform. Angelo felt that his team played well enough to earn at least point if not the outright win.

“We needed to have more lateral movement but we’ll take some good things from the game,” said Angelo. “We had the potential to finish and get a win against a good Wilmington team. They’re always a strong program. We worked hard for 80 minutes. I couldn’t be more proud of them.”

The Warriors had several opportunities in the first half as a bouncing shot to goal was handled by Horgan. Also, Fitzgerald had a shot on a free kick from about 25 yards away which Horgan handled. Fitzgerald, Wakefield’s go-to player on offense, also had a shot go over the net and a shot to goal.

In the second half, Horgan was beaten on the right but the Wildcat defense was there to prevent a goal as a fullback cleared the ball away on a bid. While the Warriors had possession, they didn’t quite get some of the quality chances to score that Wilmington did. Junior Jonathan Ingalls had a free kick from about 25 yards away right on the target and Fitzgerald had one last bid rolled wide of the left post.

Wakefield fell to 2-3-1 overall and 1-3-1 in the Middlesex League Freedom division.

“These losses hurt the most because I felt like we played well enough to earn at least a point,” said Angelo. “But we’ll move on from this.”

The Warriors will have to put the defeat behind them as they prepare to take on rival Melrose tomorrow night at 5:30 p.m. at Walton Field.