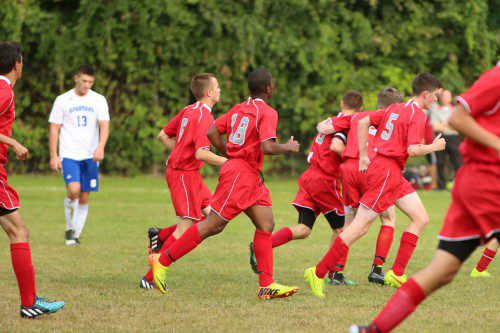 THE WMHS boys’ soccer team ran onto the field during its 4-2 victory in Stoneham. The Warriors prevailed again last night at Walton Field as they blanked Melrose, 3-0. (Donna Larsson File Photo)

“That is a good win. I’m really happy after this game. Was it the prettiest game? No. Was it the most technically sound game? No, but it was a really hard-fought game both ways. (This was) Easily the most physical game I’ve seen in a long time. It was kind of like an old-school Middlesex League game tonight,” said Wakefield coach Matt Angelo.

Wakefield wasted little time in scoring when Mo Janga made a nifty move around a defender and found Cam Yasi crashing toward the Melrose goal. Yasi was able to beat Melrose keeper Pedro Souza and put the ball in for the goal to make it 1-0.

“We do everything right, but in attacking is where we’ve been lacking. Not that we can’t do it but it’s just been a question of how much do we want the ball and we really wanted the ball tonight and it showed,” Angelo said after the game.

Wakefield doubled its lead shortly afterward when Neil Fitzgerald crashed the net for a goal with an assist from Joe Hurton.

The game got physical at times with both coaches looking for calls from the referees.

Wakefield took the 2-0 lead into halftime and came out strong again with shots on goal by Fitzgerald and a shot from close range by Yasi that Souza made a nice stop on.

“Ian Ritchie, our defensive midfielder, had the game of his career today. I told him when he came off the field that it was one of the best performances I’ve seen a high school player have. Mo Janga, our striker tonight, did a phenomenal job of winning the ball and pressuring the defense for turnovers,” praised Angelo.

Wakefield got an insurance goal late in the game when M.J. Urbano scored on a header, with the assists going to Yasi and Fitzgerald to make it 3-0, where it would stand.

“I just told them M.J. Urbano’s goal was an old-school goal, crashing the net as hard as he could and winning the ball, outworking them for the ball.That’s been our theme the last couple of games. We popped two goals in in the first five minutes and we kept the pressure up and got one in in the second half. I think this was the first game this year that we’ve played a full 80 minutes and had a solid team effort,” said Angelo.

Wakefield increased its record to 3-3-1 overall and 2-3-1 in the Middlesex League Freedom division. The Warriors face Lexington on Saturday afternoon at 2 p.m. in the Kicks For Cancer Tournament which will be held at Concord-Carlisle High School.