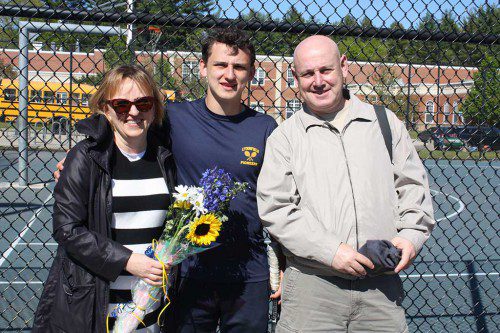 SENIOR CAPTAIN Danny Bronshvayg presented flowers to his parents Yelena and Michael during a Senior Day ceremony held prior to the Pioneers’ 3-2 victory over North Reading May 18. Bronshvayg won his second singles match in two sets. (Dan Tomasello Photo)

The Pioneers took home a big 3-2 win in their senior game against North Reading May 18.

The second doubles team consisting of sophomores Sean Murray and Lorenzo Russo won their match in three sets. Murray and Russo won the first set 7-6 (7-5), lost the second set 3-6 and prevailed 6-0 during the third set.

To top it off, the third doubles team consisting of Book and Prouty took home a win as well.

The Pioneers lost 3-2 to Bishop Fenwick on May 16.

Dunn said he was very proud of the Pioneers’ matches this week.

“This week was a great team effort where we got a win from everybody in the starting lineup with our first and third singles on Monday and on Wednesday’s victory over North Reading with our second singles, first and second doubles and a senior day 6-0 win from our third doubles team of seniors Joshua Book and Kyle Prouty,” said Dunn.

The Pioneers host Maimonides in the locals’ final match of the season on Thursday, May 26, beginning at 4:30 p.m.