Boys’ track has what it takes to go the distance 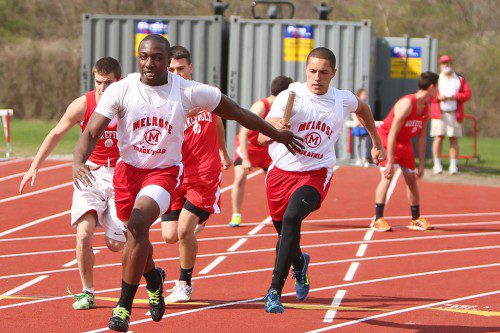 WILL CAFFEY (clutching baton) has been lights out for the Melrose boy’s outdoor track team. (Donna Larsson photo)

MELROSE — Spring has arrived and the big thaw has finally allowed the first hosted meet for the Melrose High School boys’ outdoor track team who are now enjoying the great outdoors with two track meets under their belts. If there were a theme applied to the team in 2015 it might be “going the distance.” After two meets Melrose has seen a great amount of strength in their distance running, with a specialty in both mile and two mile and have qualified for states in a number events including their tough 4×100 relay team.

This season the Red Raiders will be led by quad captains Tim Zhang, Chris Devir, Will Caffey and Keith Lovett. Despite a season-opener loss to Reading on April 8 Melrose produced some fine performances that already qualified a number of athletes for states. Speedy sophomore Kevin Wheelock has stormed through the gates for Melrose in the mile race, qualifying against Reading with a time of 4:45. Melrose’s 4×100 relay team also qualified for states with a time of 45.5 behind the legs of Tim Zhang, Jay Tyler, Will Broncherio and Will Caffey. Caffey, individually, flew past the competition with a 22.4 in 200 meter and qualified for his efforts, and teammate Adam Cook took victory the two mile.

On Monday, Melrose hosted their first meet of the season against Stoneham at Pine Banks Park on a sun-soaked day with dry conditions. The result was a heartbreaking 69-67 loss that was decided by the final relay. The Raiders however, commanded in a number of other events, including the 4×100 team of Tim Zhang, Brian McLaughlin, Will Broncherio and Will Caffey, who took victory. Kevin Wheelock blew away the competition in the mile, running a good half the length of the track ahead of his closest Spartan competitor for a first place finish. Melrose took, third, fourth and fifth in the event overall.

Overall, Melrose is showing great strength at top but could use some depth in the middle.  “It came down to the last relay unfortunately,” says head coach Tim Morris. “We had great first place results in some areas but overall needed some more second-third finishes to secure the points.”