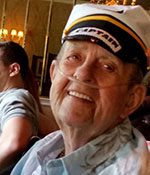 MELROSE — Brendan C. “Sluggo” Hildreth, 85, of Melrose and formerly of Wakefield, died on Wednesday, Oct. 26, at the Lahey Clinic Medical Center in Burlington.

Born in Waltham on June 8, 1931, he was the son of the late Clifford C. and Winnifred (Connaire) Hildreth.

Mr. Hildreth was raised and educated in Wakefield. He was a member of the Most Blessed Sacrament Parish in Wakefield.

Mr. Hildreth served in the United States Army during the Korean War and was a member of the Wakefield American Legion and the Disabled American Veterans. He was also a life member of the 187th Airborne Rakkasans.

Mr. Hildreth founded the Atlantic Construction Company of Wakefield with F. Harold Meuse in the 1960s.

Funeral from the McDonald Funeral Home, 19 Yale Ave., Wakefield on Monday at 11 a.m. followed by a funeral Mass in the Most Blessed Sacrament Church, 1155 Main St., Wakefield, at noon.

Visitation for relatives and friends at the funeral home on Sunday from 1 to 4 p.m.