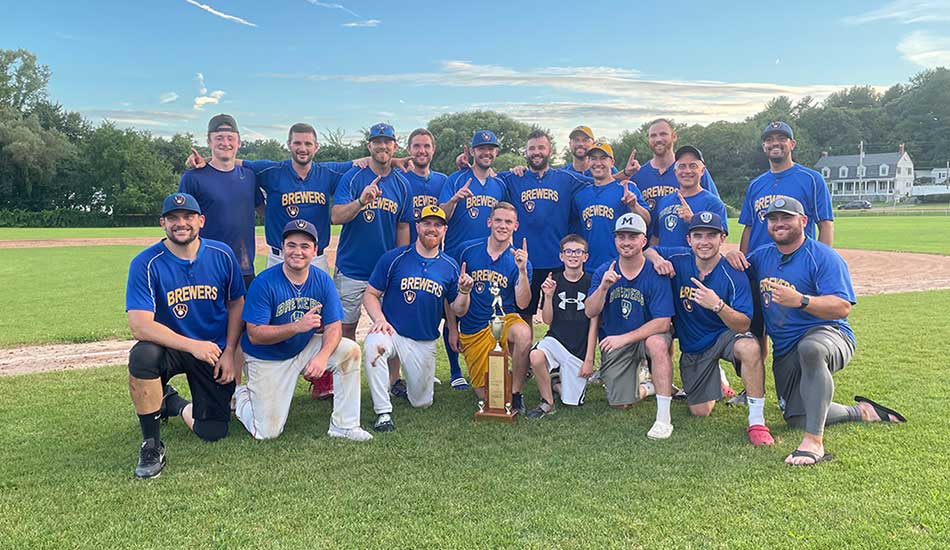 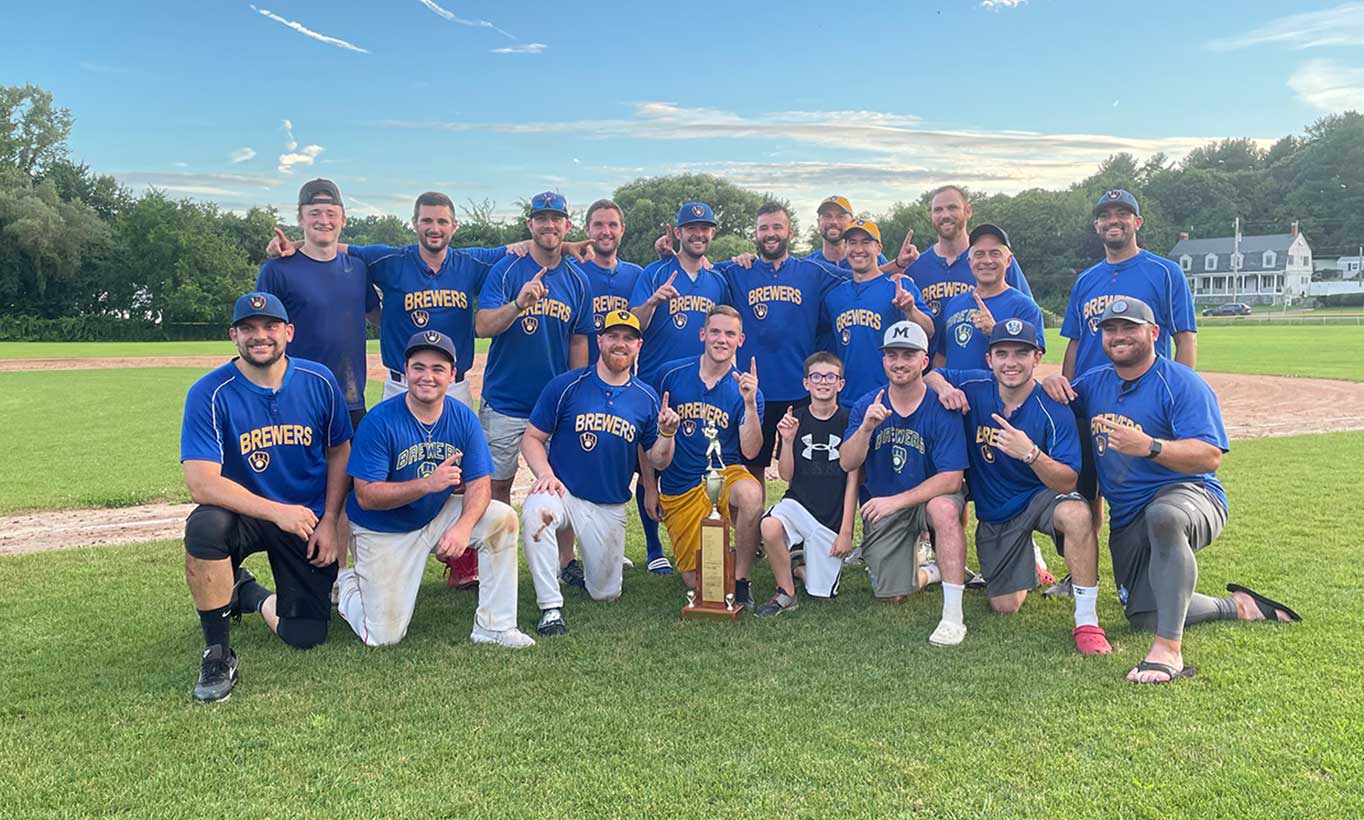 THE BREWERS are the 2021 Twi League Champions. The Brewers, who are sponsored by The Savings Bank, finished the regular season at 9-3 and took the top seed into the playoffs where they beat the Loafers two games to one in the semifinals and the Unknowns 3-1 in the Finals.  (Courtesy Photo)

WAKEFIELD — The Wakefield Twi League belongs to the Brewers in 2021.

The team in blue finished the job on Friday night at Moulton Park with a 3-1 victory over the Unknowns in Game 4 of the Finals. It was the third consecutive win for the Brewers who stormed back after dropping Game 1 by an identical 3-1 score. The Brewers out-slugged the Unknowns by a combined score of 28-10 in Games 2 and 3.

Game 4 pitted the same starters as Game 1 against each other again. Unknown Adam Chanley was just a little bit better than Colin Jaena in Game 1. Those roles reversed on Friday night but both went the distance as Jaena gave up six hits and one earned while striking out five and walking two while Chanley surrendered five hits and three runs with no K’s or walks.

The Brewers broke through with two runs in the 3rd and one more in the 5th. Jaena shut out the Unknowns for six of his seven innings, only allowing one run in the 5th.

Jaena had some work to do early as the Unknown bats came out strong in the 1st with two one-out base hits by Bobby Pearl and Brett Maloney. The young righty settled down to get Geoff Eriksen and Kevin Murray to pop up and end the threat.

Chanley cruised in the first two frames before the Brew Crew rallied in the 3rd. Tom Leahy picked up the first hit of the day for his Brewers with one out in the inning. That set off a string of base hits as Jaena followed with one and Matt Fiore and Brendan Casey both singled later with two outs to score Leahy and Jaena for a 2-0 lead. Chanley limited the damage by getting John Halsey to ground out.

The Orange loaded the bags in their own half of the 3rd but Jaena was up to the challenge. He fanned Sean Alexander to start but Brandon Panarese and Pearl singled. Jaena got Maloney to pop up but walked Eriksen to load the bags for Murray. Jaena won the battle by getting the Unknowns’ catcher to ground into a fielder’s choice.

Chanley allowed just one base runner in the 4th – a Chris Casey single – but quickly got out of it. Jaena sat the Unknowns down in order in the 4th. Pearl walked for the Orange in the 5th and Maloney doubled him in but was thrown out trying to stretch it into a triple on a relay from Joe Greer in right field to Chris Coombs at second and over to Brendan Casey at third.

Chanley sat the Brewers down in order in the 6th and worked around a Jaena single in the 7th to give his team a chance to rally in the bottom of the 7th but Jaena was up to the challenge. Scott Elwell led off with a single but was sent back to the bench when Bryan Butt hit into a fielder’s choice. Alexander popped out and Panarese struck out to set off the Brewer celebration.

The Brewers, who were sponsored again by The Savings Bank this year, defended their top seed first with a 2-1 series win over the Loafers in the semifinals before beating the Unknowns. The Brewers finished the season with a 9-3 record, tied with the Slappers but the Brewers won the season series 2-1.

The Brew Crew actually started their season with two losses before winning nine of their final 10. They finishing the campaign on a blistering seven-game winning streak, proving that they were the team to beat by outscoring opponents 36-18 in that stretch.

The Brewers boasted plenty of depth this year both on the mound and in the lineup.

It isn’t always the case that the best team wins in the postseason. It was this year in the Twi League – another entertaining and successful summer of sandlot ball at Moulton.