Bugler answers the call for Marblehead in Div. 2 North first round game 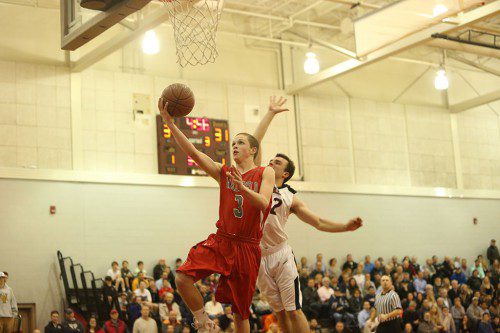 JUNIOR GUARD Andrew Miller (#3) goes up for a shot as Marblehead’s Justin Faia (#12) goes up to try and block the shot. Miller led Wakefield in scoring with 13 points. (Donna Larsson Photo)

MARBLEHEAD — The Wakefield Memorial High boys’ basketball team played some top teams this season and were involved in some very close games against those clubs. The Warriors even won a few of those contests.

However, Wakefield’s state tournament game against Marblehead wasn’t one of them.

Wakefield was unable to pull out a victory against second-seeded Marblehead in the first round of the Div. 2 North tournament despite keeping the game close. The Warriors came out on the short end of a 60-51 tally last night before a big crowd at the MHS Field House.

The Warriors wrapped up their year with a 9-10 record (10-11 record if the exempt Malden games are included) as they were denied the upset bid. Meanwhile the Magicians (20-1) advance to the quarterfinals where they will face Malden Catholic.

Marblehead led pretty much the whole way and had a double digit lead in the first half. However Wakefield wouldn’t go away and stayed in the game. The Warriors were down 11 points, 24-13, after the first quarter and trailed by as many as 14 points (27-13) in the contest. But Wakefield cut the lead down to nine points (35-26) at halftime.

The second half is where the Warriors chipped into the lead. Wakefield cut the lead down to two points (42-40) in the third quarter and trailed 44-40 after three periods. In the fourth, Marblehead kept Wakefield at arm’s length. Every time the Warriors made a basket, the Magicians seemed to have an answer.

“One positive is that they couldn’t turn us over with their press. We had maybe two or three turnovers and that was against their quarter court trap,” continued Simpson. “We had good execution against their press.”

Marblehead senior guard Patrick Bugler netted a game high 20 points and showed why he was a Northeastern Conference all-star.

“Marblehead is a great team and number four (Bugler) showed why he is an all conference player,” said Simpson. “He was their leading scorer and he made some big shots. Number 23 (Derek Marino) is a quiet assassin. He is their second leading scorer and a very good offensive player. I may be dating myself, but he reminds me of John Havlicek.”

Marino, a junior forward, was held to nine points.

Leading the way for the Warriors was junior guard Andrew Miller with 13 points including a trey. Off the bench, Andrew DeLeire, a senior guard, poured in 11 points. No other Wakefield player scored in double digits.

Senior John Evangelista, a guard, had nine points but most of them came late in the game.

As a team, Wakefield shot 6-for-25 from behind the three-point arc.

“We need to shoot about 35 percent with three-ball to have a chance to win,” said Simpson. “We had some good looks, but we missed the shots.”

Wakefield scored the first basket of the game as Miller putback a missed shot with 6:57 left in the first quarter. That would be the only time of the contest that the Warriors had the advantage.

After one out of two free throws by Bugler, senior guard Justin Faia sunk a three-pointer with 6:06 left to put the Magician in front, 4-2. After an Alex McKenna layup tied the game at 4-4 with 5:33, Marino canned a trey and Bugler got an outside jumper to fall to put the home team ahead, 9-4, with 4:41 left.

Senior forward Zach Price got a rebound and put in the basket for the Warriors, but Marino scored from inside to give the Magicans an 11-6 advantage. Nadeau and McKenna recorded back-to-back layups to cut the lead to 11-10 with 2:37 left in the first quarter.

But Marblehead closed out the frame by going on a 13-3 run to take a 24-13 lead after eight minutes.

Bugler got a three-point shot to fall and Nadeau took the ball to the basket for two points. Senior guard Drew Gally came off the bench and made an immediate impact. Gally put in a rebound of a missed shot with 1:18 left to give the Magicians a 16-12 lead. Evangelista hit one of two foul shots, but then Gally hit back-to-back trifectas to put the Magicians ahead 22-13. After two missed free throws by Marino, senior forward Bo Millett (13 points) got the rebound and put in a shot before the buzzer for a 24-13 Marblehead lead after one.

Bugler hit a jumper and was 1-for-2 from the charity stripe to give the Magicians a 27-13 lead with 6:37 left in the second quarter.

Miller canned a trey and DeLeire recorded a layup to cut the lead to 27-18 with 3:50 remaining in the first half. After an outside shot by Marino, DeLeire recorded a three-pointer as he gave the Warriors a boost off the bench. Millett made a basket and junior Joe Carmilla-Smith drove to the basket for the Warriors to cut the lead to 31-23 with 1:35 left.

DeLeire then launched and got another trifecta to fall as the Warriors were down by just five points, 31-26, with 56 seconds left in the half. But Millett got a hook shot to fall and scored from inside the paint in the final seconds as Marblehead took a 35-26 lead to the locker room.

The Warriors were still in the game at that point and they made it even closer in the third quarter as they chipped away at the lead. McKenna recorded a layup with 7:40 left and Bugler hit one of his own just afterward. DeLeire hit a trey and Miller stole the ball and made a layup to cut the lead to 37-33 with 4:51 left in the third.

Bugler made two free throws and Nadeau made a runner to make the score 39-35 with 4:01 left. Seamus Keaney, a junior guard, recorded a layup and Millett made a foul shot to nudge the Magicians lead back up to seven points, 42-35, with 2:16 remaining.

Miller recorded a layup and then Evangelista got his first three-pointer to go through the cylinder to cut the lead to 42-40 with 40 seconds left. But Millett drove to the basket with 9.6 seconds left to give Marblehead a 44-40 lead after three quarters.

The Warriors made a great push in the fourth to try and overtake the Magicians. But Marblehead made the shots when it had to and Wakefield missed some good opportunities. The Warriors also didn’t get some of the calls for fouls they would’ve liked either which led to many jeers from the Wakefield fans. Also the team fouls were a disparaging number as it was 10-3 in favor of the home team at one point in the second half. That didn’t help Wakefield’s cause either as the Magicians were in the double bonus down the stretch.

Marino drove the baseline for a basket with 7:44 left. Then Miller scored on a nice pass from Price with 7:21 left to cut the lead to 46-42. Keaney scored from along the baseline, but then Evangelista got a trey to go in as the Warriors cut the lead down to three points, 48-45, with 5:39 remaining in the fourth period.

Millett got a rebound and put it in the basket and then Bugler got his own rebound and laid the ball in the cylinder to bump the advantage up to seven points, 52-45, with 4:29 left.

Evangelista was fouled from behind the three point arc and made two out of three foul shots. Millett then recorded two free throws of his own for a 54-47 tally with 2:38 left.

Bugler recorded a layup with 2:09 left to put the score at 56-47. After three missed free throws by the Magicians, Nadeau scored from inside with 1:40 left. Bugler was then fouled by McKenna, who was in foul trouble much of the night and picked up his fifth foul to foul out of the contest. Bugler made one of two free throws.

Miller scored from the baseline to cut the lead to 57-51 with 1:05 left for Wakefield’s final two points of the game.

Gally scored on the fast break with 59 seconds left and Keaney made one of two free throws with 12.3 seconds left.

Simpson emptied his bench in the final seconds to get everyone into the game as Wakefield’s season came to an end.

Simpson pointed out that Nadeau missed several games and often wasn’t 100 percent. Also, junior Devin O’Brien and senior Calvin Connor missed time with ailments as well. Then freshman guard Ryan Marcus turned an ankle and was out for four weeks.

“We had a great season,” said Simpson. “We dealt with adversity and it is a learning experience.”