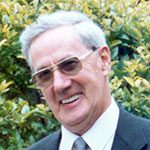 Mr. Martin was raised in Somerville and attended Somerville public schools. He later enlisted in the U.S. Army and served for three years in Europe during World War II. Upon returning home, he continued his service by joining the Massachusetts National Guard, where he remained for 28 years prior to his retirement. He had served as an administrator and retired with the rank of First Sgt. Mr. Martin served at many National Guard armories in the area, including the Wakefield Armory. He was a member of the First Baptist Church of Wakefield, was an avid golfer and enjoyed traveling.

Mr. Martin was the beloved husband of the late Elizabeth M. (Mountain) Martin, with whom he shared 57 years of marriage and together they raised three children. He was the loving father of Charles E. Martin Jr. of Wilmington, Kenneth B. Martin and his late wife Susan of Londonderry, N.H. and Jayne E. Martin of Wakefield. He is also survived by his adoring grandchildren Ethan Martin and wife Kristen of Salem, Rebecca Martin and her fiancé Karl Reed of Arkansas and Timothy Martin of Wakefield. He also leaves behind several nieces and nephews. He was preceded in death by his 11 siblings.

His funeral service will be held in the McDonald Funeral Home, 19 Yale Ave. on Monday at 11 a.m. Visitation for relatives and friends will be held at the funeral home on Sunday from 1 to 4 p.m. Interment will be at Forest Glade Cemetery in Wakefield.