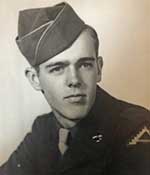 Gil was predeceased by his son, Keith; brothers, William and Leo; and daughter-in-law, Mary.

Gil graduated from Somerville High School, enlisted in the U.S. Army and served in the occupation of Japan. He was a master mechanic for 10 years before serving as a police officer for 27 years in Wakefield, Mass., where he received the Golden Eagle of Leadership award for outstanding service in the line of duty.

Upon retiring from the police department, Gil and Mae became managers of two hotels in Delray Beach, Fla., and spent summers at their home in New Harbor, Maine. Gil was a former member of Wawenock Country Club in Walpole, Maine, a volunteer at Miles Memorial Hospital and Rummage Sale, a member of Retired State County and Municipal Employees Association of Mass., and lifetime member of Elks Lodge of Wakefield, Mass.

Above all else, Gil was a family man who put family first 100 percent of the time. His “sweetheart” of 71 years was the light of his life, and his children and grandchildren were perfect in his eyes. He was a patient mentor to his children, grandchildren, nieces and nephews and his passion for building, fixing, and music, now live on through them. He was a kind-hearted soul who constantly gave thanks for his blessings, even in his final hours. He is a role model to many.

Arrangements are under the direction and care of the Strong-Hancock Funeral Home, 612 Main Street, Damariscotta, Maine. Condolences, and messages for his family, may be expressed by visiting: www.StrongHancock.com.